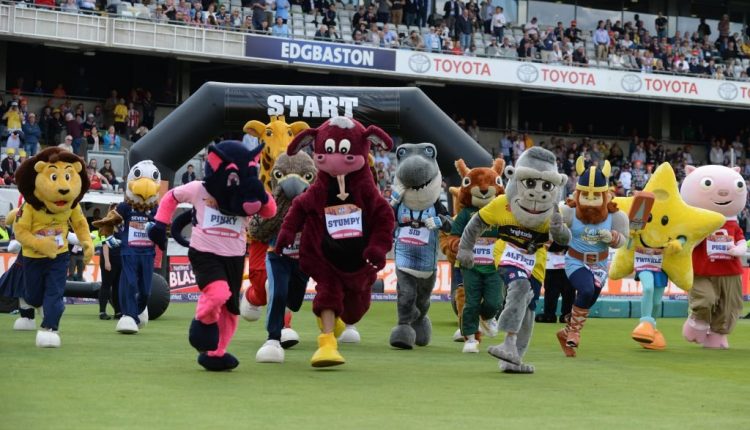 Because it is strange. Three matches of cricket, all of which are the most important T20 fixtures the country holds all year, played out in front of thousands of fans dressed as nuns, or Snow White, or Darth Vader or anything else you can order last minute on Amazon Prime for thirty quid.

A day where in between two deadly serious semi-finals, the mascots of each county line up and race each other with their massive cartoon feet and massive cartoon heads wobbling all over the place and jump into ball pits and climb over obstacle courses until one bloke who’s dressed as a bird eventually wins by about seven miles. It was all fun and games until he took his big wobbly head off at the end to reveal he was Eluid Kipchoge. That really shouldn’t have been allowed.

But, the thing is, it works. It really works. Sport is nothing if not entertainment and the energy of the vamped up crowd bleeds out onto the pitch to add to a spectacle that can threaten to boil over.

The contrast of the emotions on show throughout the day makes it unique.

Hampshire lost the first semi-final in tortuous circumstances, throwing away a game that wasn’t just theirs to win but one that they already had. As Josh Davey struck Somerset’s winning runs, eleven Hampshire players cut figures of absolute desolation amongst a sea of childish hysteria.

There is also a criticism of Finals Day that it’s too much of a piss up. A day at the darts, except at the cricket. And there is validity there. On my train up this morning, I sat with five blokes who spoke about today’s Premier League fixtures all the way from Euston to Birmingham, only to hop off at New Street and ask how to get to Edgbaston. It’s a day of cricket, attended by many non-cricket fans, who just enjoy their annual day out to stay in touch with the sport. And to that I say, so? I do that with church every year.

And then there’s the families. Booze and loud songs keep the kids away. How are we going to engage the next generation of cricket fans by singing Neil Diamond?

On this matter, cricket would do well to heed the warnings of football, where the incessant drinking and foul language has seen the sport shrivel from what it once was and cede its place to bowls as the nation’s favourite pastime. Finals Day and football are 12A rated events. Yeah, it’s probably best for a three-year-old not to be in attendance, but they go to bed at 7pm so who cares. It’s okay for some days to be just for the grown-ups and also for any kids from Birmingham whose parents don’t mind them getting home a bit late on a Saturday.

In all honesty, I’m not sure if I’ll agree with all this come tomorrow morning. Once the haze and adrenaline wears off and reality sinks back in. We all say things we don’t really mean when we get caught up in the moment, but then again, I guess that’s kind of the point.