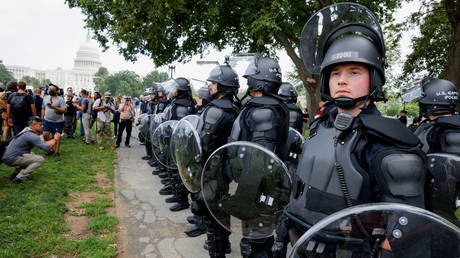 Liberal critics have been quick to celebrate the “teamwork” of the US Capitol Police and multiple other law enforcement agencies, shown prepping for the Justice for J6 rally in Washington, DC en masse.

Ahead of Saturday’s rally – which reports have claimed could bring in as many as 700 Donald Trump supporters – the US Capitol Police Twitter account posted an image of hundreds of officers from multiple law enforcement agencies standing, ready to take orders from a Capitol police officer with a bullhorn.

“Teamwork,” the tweet read. National Guard soldiers are also on standby in case they are needed. Most officers called in for Saturday’s events are equipped with batons and safety vests.

Here are a few more pictures of the 7:15am swearing-in with our local, state and federal law enforcement partners. pic.twitter.com/8biG2D2dmb

While numerous conservative pundits have dismissed the rally and its potential fallout, liberal critics have been celebrating the massive police preparation for the event, tying it to the January 6 Capitol riot that led to multiple deaths, including a protester shot by an officer.

“Kid gloves off today,” one Twitter user wrote in response to the photo of the waiting law enforcement officers.

“Deal with them accordingly,” another cryptically added.

I thank these officers for their courage & devotion to duty as they put themselves in harm’s way to protect their fellow Americans.

Thank you to the @CapitolPolice and all of the federal, state, & local law enforcement who are assisting today’s effort to safeguard the Capitol. https://t.co/0ChgBLctPk

There’s nothing more patriotic than standing on the frontlines against fascism. God protect our USCP who defended our nation’s Capitol on Jan 6 and are defending it again today. 🇺🇸 https://t.co/Boq56UiC43

This stinks of a set-up/bait.

Don’t give them any more fodder to paint Americans as terrorists. #JusticeforJ6

Many have blasted police for over-preparing for the event.

Look at how seriously Capitol Police are taking the threats of the far-right vs. how seriously Portland Police did. https://t.co/01uusb0tu9

They are preparing to do nothing again today. https://t.co/79tsf719Tg

According to the permit obtained by organizers Look Ahead America, hundreds are expected to attend the rally near the West Lawn of the Capitol building. They are looking to highlight the “inhumane” treatment many jailed Capitol rioters have allegedly faced. Hundreds have been charged for their part in January 6’s events, and dozens remain behind bars.

US Capitol Police Chief J. Thomas Manger warned on Friday that any potential violence will be shut down quickly.

“We have a strong plan in place to ensure that it remains peaceful and that if violence does occur, that we can stop it as quickly as possible,” Manger said, claiming there have already been threats of violence against lawmakers.

Look Ahead America Executive Director Matt Braynard, however, has described the event as “peaceful.”

“The purpose of these peaceful protests is for patriotic Americans to educate their state legislators on the power they have to give instructions to their state’s federal legislators,” he said.

IPL 2021: Full list of commentators in the Indian Premier League

Ranbir and Katrina to get married next year?

2011 WC squad was like a family, says Suresh Raina

Chris Hemsworth roped in for ‘Ghostbusters’…