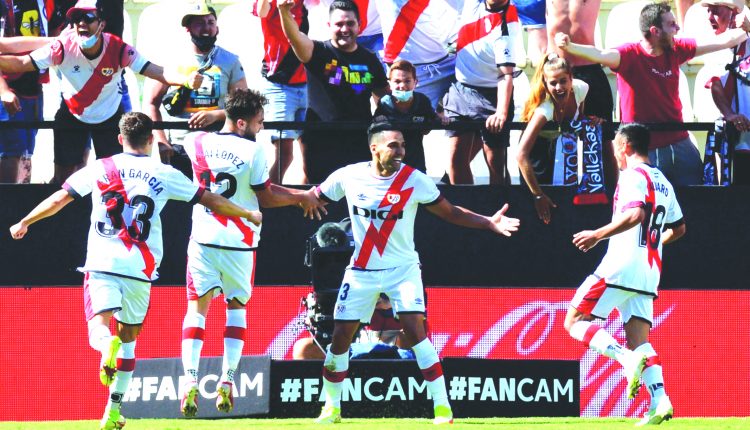 BARCELONA, Sep 18: Radamel Falcao scored 10 minutes into his debut with Rayo Vallecano on Saturday, completing a 3-0 league win over Getafe in a derby between the Spanish capital’s two more modest clubs.
The veteran striker went on as a 71st-minute substitute with Rayo 1-0 ahead. Midfielder Pathé Ciss doubled the lead shortly before he set up Falcao with a pass for the Colombian to score from an angle.
Oscar Trejo had put Rayo ahead with a penalty nine minutes into the match at Vallecas Stadium.
Rayo goalkeeper Stole Dimitrievski denied Getafe a late goal when he saved Enes Unal’s penalty.
Rayo has two wins, a draw, and two defeats in its return to Spain’s top division. Getafe is last after losing all five games. Falcao signed with Rayo earlier this month as a free agent.
Ten-man Atlético Madrid was held to a second straight scoreless draw at home. Midfielder Marcos Llorente went closest for Atlético when his 75th-minute shot from outside the area hit the post. Three minutes later, Atlético was left a man down when Félix earned back-to-back yellow cards. The referee first booked him for swatting a defender. Félix, got a second booking when he vehemently protested. (AP)

The post Falcao scores on debut for Rayo, Atlético held appeared first on The Shillong Times.

Maharshi is much more than a Mahesh Babu vehicle