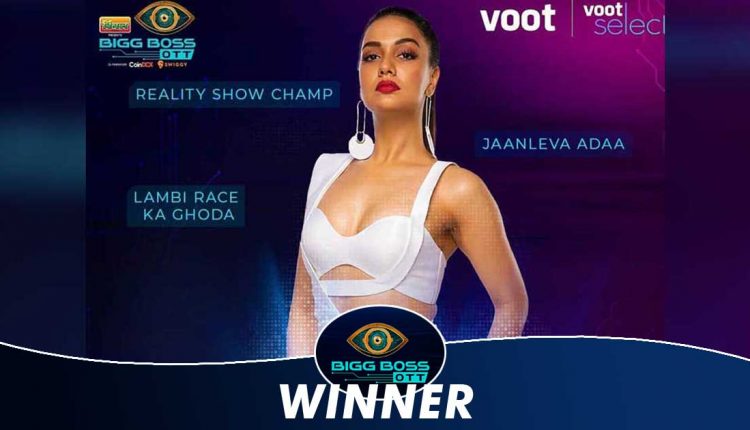 After much anticipation, Bigg Boss OTT has finally welcomed the winner of its first season! It is none other than Divya Agarwal and fans can’t keep calm. Trends are being witnessed all over Twitter and the family members are on cloud 9 today. Below are all the details that you need about the finale.

The show began with Karan Johar reminiscing all the memories of the first-ever OTT season. Bharti Singh and Harsh Limbachiyaa tickled our funny bones with their hilarious punches as ever. They entered the house and interacted with the Top 5 contestants.

The Top 5 who reached the grand finale were Nishant Bhatt, Divya Agarwal, Pratik Sehajpal, Raqesh Bapat and Shamita Shetty. The first one to get evicted amongst them all was Pratik and eventually, we saw Raqesh bid goodbye to the final race too.

Nishant Bhat was crowned as the runner up of the season. Even before Divya Agarwal was crowned the Bigg Boss OTT winner, Gauahar Khan had confirmed the news on her Twitter handle.

Riteish Deshmukh and Genelia D’Souza too graced the Bigg Boss OTT finale and entertained the viewers. Karan Johar was seen interacting with the duo on stage.

The winner of the Karan Johar hosted show will get the opportunity to enter the Bigg Boss 15 house. Just not that, the lucky contestant will be gifted a hefty sum of 25 lakhs.

A twist was seen when Bigg Boss offered a suitcase to the Top 4 contestants. They would pick it up and leave the house immediately. While they will miss the chance to become the OTT winner, the good side is that it will assure their entry into the Bigg Boss 15 house. That’s a huge opportunity. Isn’t it?

Congratulations to Divya Agarwal for winning the Bigg Boss OTT.