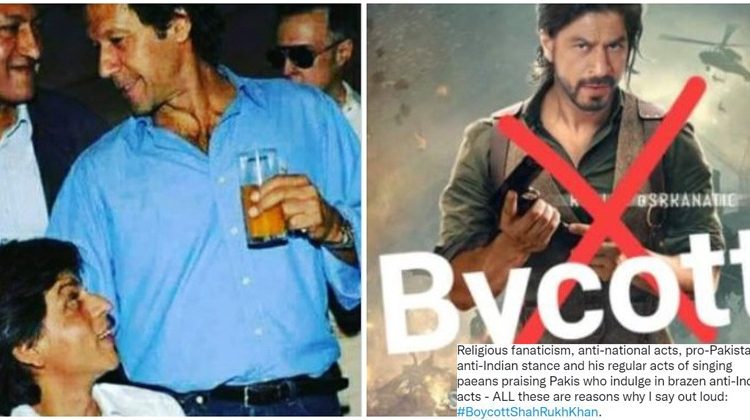 With SRK returning to the screens after a hiatus with Pathan, there’s a weird trending term which has taken over social media. Normally we see a positive kind of publicity for a superstar like him and a big budget project but oddly, Twitter has been all about him being bashed in a controversy that’s stirred up a storm.

Turns out, people are digging videos and images from the actor’s past and blaming him collectively for all the apparent hurt and disregard he has caused in terms of speaking in favour of Pakistani cricketers and opening up about intolerance in India. Here’s what these examples look like:

Before supporting anyone
I am a Proud Indian and Hindu

Bollywood People are running movie jehad against Hindu. I requests to all INDIANs #BoycottShahRukhKhan and Entire #Bollywood for Next 10 Years The garbage of #Bollywood will be Cleared Automatically. pic.twitter.com/HH0b2vRRZE

Some are sharing his old picture with Pakistani PM Imran Khan and questioning his love for India, calling him a traitor, while others blame him for disrespecting Hindu culture.

Religious fanaticism, anti-national acts, pro-Pakistan & anti-Indian stance and his regular acts of singing paeans praising Pakis who indulge in brazen anti-India acts – ALL these are reasons why I say out loud:#BoycottShahRukhKhan.

Naturally, like two sides of the same coin, there are some big SRK fans who took this opportunity to highlight how he is actually an asset for the country, and not a disgrace.

at least he didn’t make these movies for election propagandas or box-office. @iamsrk #WeLoveShahRukhKhan
SRK PRIDE OF INDIA pic.twitter.com/wOranmovsi

The war was further fuelled by some people who then blamed the actor for defaming Ashoka’s name when he took up that movie.

SRK show our hindu king ashoka in bad light… Where Ajay devgn and Akshay Kumar making movies on Tanhaji and Prithviraj chauhan he is making movie on pathan…I mean its spy action movie so why dont they give him hindu name, Why praising pathan in india. #BoycottShahRukhKhan pic.twitter.com/TTQJNZD9cx

No one knows the root of how this controversy has begun and where it is going, but for now, social media is all about SRK’s lovers and haters uniting to make his name go viral.