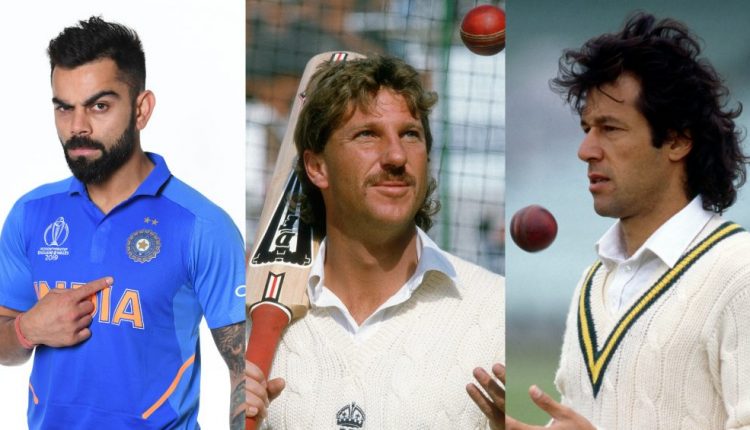 Presenting an all-time world XI of players who excelled across formats, picking them based on the ICC all-time rankings for Tests, ODIs and T20Is.

The methodology to pick the best XI was simple, yet complex. We picked the five best batsmen (including the top-ranked wicketkeeper), the top two all-rounders, two spinners and three quicks, based on their combined best ranking in the ICC charts. However, to ensure that those who never played T20I cricket aren’t at a disadvantage, we excluded all those players who featured in T20I cricket but did not make it to the top-100 all-time list for batsmen and bowlers, or top-20 list for all-rounders.

Then, we picked them based on their average rankings (Tests + ODIs for those who played just the two formats, and Tests + ODIs + T20Is for the rest).

It’s fascinating that some of Hayden’s best cricket came after he turned 30, enjoying a fine second coming at the top of the order in both Tests and ODIs. Hayden played enough to get a taste of T20Is too, hitting four half-centuries in just nine games, ending with the third-most centuries by an Australia in international cricket overall.

Few modern batsmen achieved the consistency of Amla across formats, and fewer looked as elegant while taking down bowling empires. The fastest to several multiples of 1000s in ODI cricket, Amla stands third in South Africa’s overall international charts, with his century count only behind Jacques Kallis’.

The only active international player on this list, Kohli is already a contemporary great with a lot still expected to come out of his bat. Probably the most complete batsman of his generation, Kohli started off as a power-packed white-ball performer, before tightening up his game to succeed in Test cricket too. In 2016, he became the only player to average over 50 in all three formats, an accolade he maintains to this day.

Had T20 cricket come a few decades earlier, Viv Richards would have bossed it, just like he lit up the other two formats. A devastating batsman on his day, one who really got on top of the opposition, Richards finished with more runs than any other West Indies batsman (only four have gone past since).

Lara’s batting embodied style and flamboyance, and there were certain days when the opposition just didn’t stand a chance against his freewheeling style. Lara proudly stands atop West Indies’ all-time run charts without having played a game of T20I cricket, carrying the team through a long period of major transformation, often putting up a solo show.

Batting a tad low in the XI owing to the sheer number of superstars, Sangakkara was Sri Lanka’s batting colossus, right up until his last few days in international cricket. Comfortably the highest run-getter and century-maker for his country, Sangakkara was a pillar of batting style and substance, while also doubling up as a wicketkeeper, especially in white-ball cricket.

A man who could win you a game equally with both ball and bat (sometimes on the same day), Botham remains the gold standard for seam-bowling all-rounders. Only James Anderson has taken more five-wicket hauls for England in internationals, and among Test all-rounders, only Kapil Dev scored more runs while picking up more wickets than him.

Another superlative all-rounder who also knew how to lead with intent, Imran unarguably remains Pakistan’s biggest cricketing icon. Built to succeed with both ball and bat, the World Cup winning captain was a swing bowler par excellence and a skilful late-order batsman – only Wasim Akram and Waqar Younis claimed more international wickets for Pakistan.

Hadlee’s in the team on the merit of his bowling ranking alone, but he was also an all-rounder of immense calibre, and one of New Zealand’s finest cricketers. Another great of the game who finished long before the T20 era, Hadlee remains atop the country’s Test wicket-taking charts, and took a whopping 41 five-wicket hauls (only Muttiah Muralitharan had more).

Warne made leg-spin fashionable again, charting a career of unmatched highs, even though there seemed to be controversy almost always lurking round the corner. In Test cricket, he was only behind Muttiah Muralitharan in the wicket count, even though his one-day career fizzled out in the early half of the 2000s.

Saeed Ajmal’s career was an intriguing one, beset with controversies of all kinds, but it doesn’t take away the impact he had in such a short period. Armed with a vicious doosra apart from his usual off-spinning darts, Ajmal made up for a late start by creating a significant impact across formats and was ranked No.1 in ODIs for three years. He played only in the first half of the decade, but is still the sixth most prolific international spinner since 2010.

The post The all-time all-format world XI, based on the ICC rankings appeared first on Wisden.

Monica Dogra says she is in favour of LGBT rights