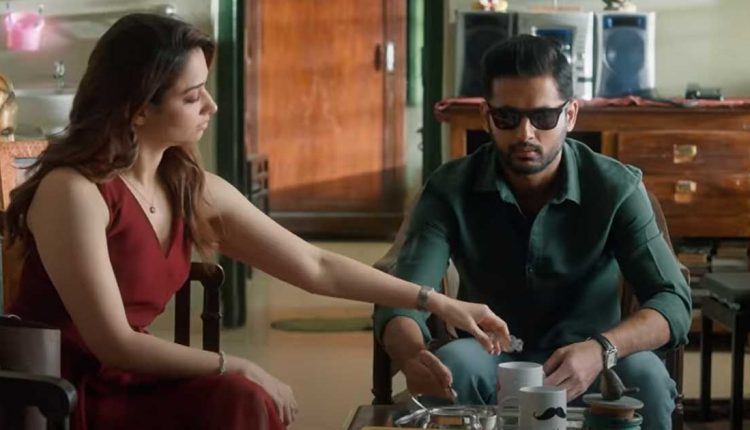 What’s Good: Nithiin and Tamannaah trying their level best to fit into the roles that have already been aced by two of the most prolific actors India has.

What’s Bad: the ghost of Andhadhun that haunts the movie at every single moment and movement. Even the cat is affected you see!

Loo Break: first decide if you want to get into it or not.

Watch Or Not: totally up to you. There are no two ways that it copies Andhadhun scene to scene (with some changes) but not major ones really.

Arun (Nithiin), a budding musician fakes blindness calling it his experiment to find a tune that he feels is missing. Soon his music introduces him to Sophie (Nabha) and she introduces him to the Goa elite. In no time he witnesses two murders and gets involved in a cat and mice chase.

Andhadhun, which hit theatres back in 2019 starring Tabu, Ayushmann Khurrana, Radhika Apte and created by Sriram Raghavan, wasn’t just any other film. It was a homage, to the yesteryear, to Sriram’s inspirations, to his audience and their thinking capabilities. To Tabu and her iconic characters, you guys! It was a film that needed to be dissected layer by layer and you would still have something left to discover.

2 years later, a team of writers (crediting the originals too) tried to adapt the same story into a different language. Pune becomes Goa, Ayushmann becomes Nithiin, Tabu is replaced by Tamannaah and Nabha plays Radhika’s part. But can there be a replacement to Sriram and his thrilling brain that originally created this satisfyingly convoluted mess of a story? Of course not.

Maestro an adaptation of 2019 hit thriller wastes no time and becomes a Telugu remake. Of course writer Sheik Dawood G. Tries to leave his mark on the story by adding some new bits to the already written screenplay. But Andhadhun in itself is such a complete meal that one won’t even feel like changing anything about it. Sheik seems to be suffering from the same thought. He does change and adds a few things to the mix but almost all of them are inconsequential to the main plot.

The main plot in itself shifts the base from Pune to Goa. The way Sophie and Arun meet is different now and does not really work in the favour of the movie-watching experience. In the original Sophie is the one who introduces Aakash to the Pune elite, but here she only ends up being an extended cameo.

Such is the thing with many other plot points that become shallow. Because they were made with keeping certain landscape in mind. You can expect Pune and its permanent residents to be diverse. But Goa? No one speaks Konkani, not even the local police officer? Not a single cultural/local reference? When we talk about inclusion and call out Hindi cinema, the same goes for every other industry in the country, and world at large.

Credit where it’s due, the scene where Simran cooks and acts all myopic by explaining how to cook a crab without making it suffer is a treat with Tamannaah too. Again it is written so well originally that it is bound to give you goosebumps.

It is a tough job. Even if you don’t think about the existence of the original, the characters in themselves are a huge challenge. The fact that Ayushmann, Tabu and Radhika blew life first and with all their superpowers makes it like walking on a double edged sword for the new actors.

Nithiin as Arun tries hard to not fall into the trap of playing a Blind man on screen. While when completely blind, he is of course amazing, but the real trouble is when he is acting blind. Ayushmann Khurrana in his version was such a treat as he changed multiple expressions in the same frame. Nithiin falls level short in that department.

Tamannaah Bhatia has the toughest job to do here. Fitting in Tabu’s shoes is no joke, and she understands that. The actor tried to replicate the magic but then can there be another Tabu? No. Tamannaah shines when she has to be cunning in her own way, but the character belongs to the OG Simmi.

Nabha Natesh who already has a smaller part is reduced to a cameo and nothing more. I wish she has more to her than this. Same is with Jisshu Sengupta who does a wonderful job, but doesn’t get much.

Merlapaka Gandhi seems to be knowing he cannot change much to the mastery Sriram Raghavan has achieved. So he sticks to the original almost the whole time. But what lacks is the wildness.

The magic in Andhadhun lies in its wild nature. Everything unpredictable, and random. Even the most intricate sequences looked like they were performed impromptu. Maestro misses that point here. Almost all the things look choreographed. The fact that you know the story and have seen better, makes it worse.

Music by Mahati Swara Sagar might have been a great album if released independently. But for a film that relies on its music too heavily, it doesn’t do justice. The background theme on piano is haunting though.

The thought of remaking already existing gems is alien to me altogether. And of the ones that are from the recent past is bizarre. Maestro might have been a spectacular film if Andhadhun didn’t exist, but that ‘if’ is a privilege the film doesn’t have.

Must Read: Netrikann Movie Review: Nayanthara Is The Hero Saving Men & That Is Everything In This ‘Blind’ Adaptation

The post Maestro Movie Review: Nithiin & Tamannaah Bhatia’s Thriller Is Haunted By The Ghost Of Andhadhun appeared first on Koimoi.

‘Avengers: Age of Ultron’ to have alternate…