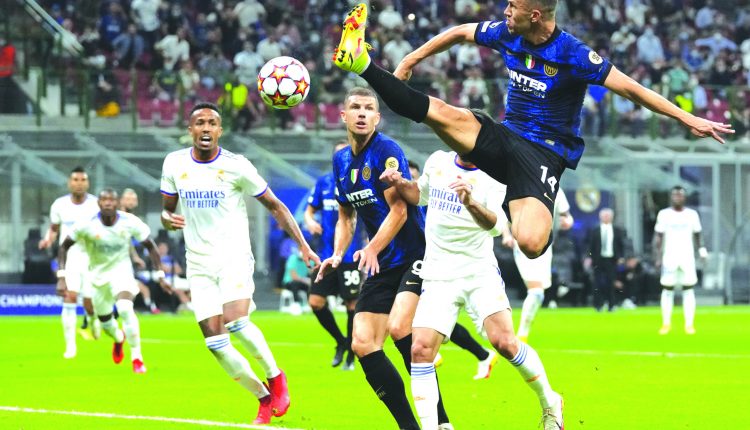 MILAN, Sep 16: Inter Milan was made to pay for its profligacy as a late goal from substitute Rodrygo saw Real Madrid snatch a 1-0 win in their Champions League opener on Wednesday.
Rodrygo scored in the 89th minute with what was only Madrid’s second shot on target. Inter had peppered its opponents’ goal but been denied by a string of fantastic saves and some wayward finishing.
“We deserved so much more. But if you don’t score goals it’s difficult to win,” Inter forward Edin Džeko said. It was a first Champions League match back in front of its fans for Inter with more than 37,000 at San Siro.
Sheriff Tiraspol leads Group D after beating Shakhtar Donetsk 2-0 on its Champions League group-stage debut earlier.
“It was the most difficult match of the group and we did it by suffering too,” Madrid coach Carlo Ancelotti said. Inter and Madrid met in last season’s group stage, with the Spanish team winning both encounters – 3-2 at home and 2-0 at San Siro.
Inter had also won only three of its last 16 Champions League matches but it dominated from the start on Wednesday and almost took an early lead. Džeko’s angled shot was parried by Courtois and Milan Škriniar’s follow-up was deflected wide.
Madrid managed a couple of incursions into the Inter penalty area but the danger was calmly cleared by the Nerazzurri. The visitors didn’t have a shot a on target in the first half, and the closest they came was when Éder Militão headed a corner wide of the right post.
Moments later Inter had a double chance as first Martínez headed wide of the left upright and then shortly afterward Marcelo Brozović’s shot went narrowly past the same post.
Inter should have done better nine minutes into the second half. Courtois again did well to palm away Dzeko’s glancing header, Ivan Perišić missed the target from point-blank range and
At the other end, Madrid finally had its first shot on target in the 57th but Dani Carvajal’s attempt was at a comfortable height for Inter goalkeeper Handanovič.
Madrid then snatched all three points right at the death as Eduardo Camavinga flicked the ball on for Rodrygo to volley into the bottom right corner. (AP)