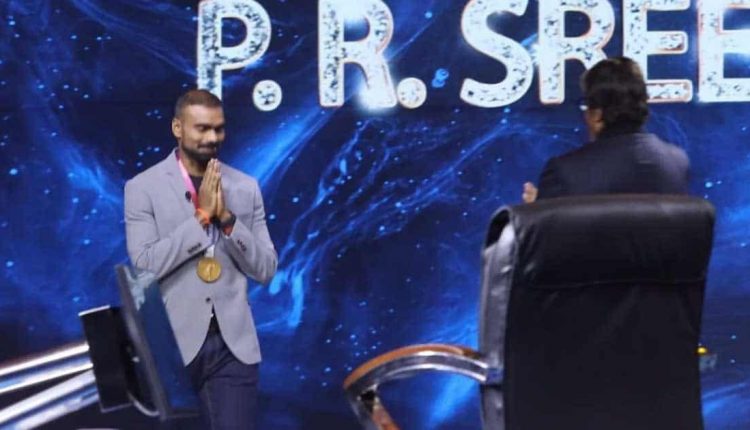 While conversing with host Amitabh Bachchan on ‘KBC 13’, India goalkeeper P.R. Sreejesh talks about winning an Olympic medal in hockey after 41 long years.

Sreejesh shares: “We have been waiting for 41 years for this medal. Personally, I’ve been playing hockey for 21 years. I started playing hockey in 2000 and since then, I’ve grown up listening to how our elders, grandparents had made it big in hockey, we had 8 gold medals in hockey. So, we started playing because of the history behind the game. After that what happened was that hockey was played on AstroTurf, the game was changed and our downfall began.”

Asking more about AstroTurf, Amitabh Bachchan tried to understand the level of difficulty while one plays on AstroTurf. Explaining this, Sreejesh says: “Yes, a lot, Sir. Because AstroTurf is an artificial grass where we put water and we play. Playing on the natural grass, the effort and game style is totally different as opposed to playing on AstroTurf.

“Earlier, all the players only played on the grass ground, trained on it and even played internationally on the grass ground. Nowadays what has happened is that the kids start playing on the grass field and later have to play hockey on the Astroturf which takes a lot of time. There is a different type of training that one undergoes to play on the AstroTurf, the hockey stick used is also different,” he adds.

‘Kaun Banega Crorepati 13’s ‘Shaandaar Shukravaar’ will see the presence of Olympic stars Neeraj Chopra and P.R. Sreejesh as special guests on the hot seat playing for a social cause. The episode will air on September 17 on Sony Entertainment Television.

Sahil Khan On Harassment Allegation By Former Mr India Manoj Patil: “This Could Be A Publicity Stunt With Community Angle”