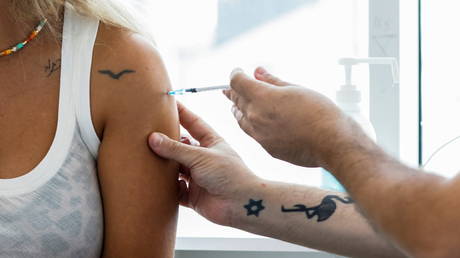 A third dose of Pfizer’s vaccine could cut the risk of Covid infection by more than 10 times in elderly patients, according to an Israeli study, which was peer-reviewed just ahead of a key FDA meeting on boosters for Americans.

Published in the New England Journal of Medicine on Wednesday night, the newly peer-reviewed study found that infections and severe Covid cases “were substantially lower among those who received a booster (third) dose of the [Pfizer-BioNTech] vaccine” compared to those who took only two.

In study of participants in Israel who were 60+, the rates of confirmed #COVID19 & severe illness were substantially lower after a booster (third) dose of the BNT162b2 vaccine than after two doses. #SARSCoV2 #Covid19Vaccines #IDTwitter https://t.co/aOPyI7Y23s

The findings are based on a review of official data for some 1.1 million Israelis over the age of 60, who were divided into two groups: those who received a booster within 5 months of their second dose, and those who did not.

Citing other recent research, the study noted that vaccine-induced immunity could drop significantly in just six months after a recipient’s second dose – providing only twice the protection compared to non-vaccinated individuals. After a third shot, however, effectiveness was pushed back up to 95%, “a value similar to the original vaccine efficacy reported against the alpha variant,” the study said.

While the researchers said they did their best to correct for any potential biases in the data, they acknowledged that their findings could reflect “behavioral changes after vaccination” rather than improved immunity alone, as the study did not attempt to measure antibody levels and instead relied on official case counts.

Nonetheless, the findings come as the US Food and Drug Administration (FDA) prepares to meet on Friday to decide on whether universal booster doses are needed for Americans. Dr. Sharon Alroy-Preis, one of the authors of the Israeli study, will present the new research at the meeting.

FDA not yet sold on Covid-19 booster jabs, as Pfizer & Moderna share data showing their vaccines lose efficacy over time

Even as of Wednesday, the FDA still appeared unsure about the wisdom of boosters in the US, publishing a briefing document stating that it had yet to independently review multiple studies or confirm data provided by vaccine producers, suggesting a high degree of hesitancy even with the agency’s decision expected within a matter of days.

On the international level, meanwhile, the World Health Organization (WHO) has repeatedly urged nations to scale back their plans for booster shots, noting that many in developing countries have yet to receive a single dose as some wealthier states mull third – and in Israel’s case, even fourth – shots for citizens. Earlier this week, WHO head Tedros Adhanom Ghebreyesus even suggested a global pause on boosters, hoping to reach a 40% vaccination target worldwide before any nation considers extra doses.

The debate over booster shots has picked up steam as a growing body of evidence indicates that vaccine-induced immunity wanes over time, with some research suggesting the Delta variant mutation may explain the decline in protection. Israel has largely led the world in boosters, administering just shy of 3 million third doses after approving them for those 12 and older in late August. It is now weighing whether yet more shots could be needed, as the country sees thousands of ‘breakthrough’ infections despite high vaccination rates.

Watch: Why was ancient Egyptian king Tutankhamun’s tomb not…