‘I thought I was dead’: Steward hit by misfiring Ronaldo speaks about experience as footage captures impact (VIDEO) 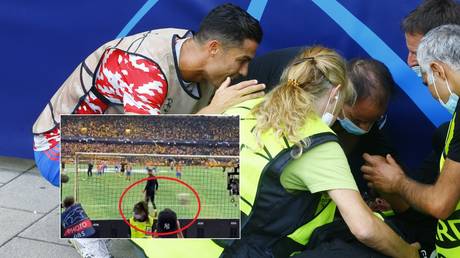 The steward who crashed to the ground after being struck by a wayward shot from Cristiano Ronaldo has revealed her shock at the incident, after she was tended to by the Manchester United star and given one of his icon No.7 shirts.

Marisa Nobile was on duty at the Champions League meeting between United and Young Boys in Switzerland on Tuesday when her evening took an unexpected turn.

As United were warming up on the pitch at the Wankdorf Stadium, Ronaldo whipped one of his efforts way over the bar and bang onto the head of Nobile, who was facing the other way.

The steward went to the deck and was seen lying prone as she was attended to by fellow staff at the stadium.

Nobile collapsed after taking the ball to the head. © Reuters

A concerned Ronaldo was also seen making his way over to comfort the victim of his stray strike.

Footage online has shown the impact of the strike and the aftermath as Ronaldo appeared on the scene.

Nobile has now said she thought she had perhaps died and gone to heaven when the 36-year-old football icon appeared above her.

“I was gone in my head and went to the ground,” Nobile told the Swiss media.

“Afterwards I saw Ronaldo above me! I thought, ‘Oh my God no, did I die?’

“Ronaldo said: ‘No, no. Excuse me! What’s happening? Are you all right?’

Ronaldo arrived to check on the steward. © Reuters

Nobile added: “I was in great pain. My God. I was more or less crazy! But then I saw Ronaldo and the headache was gone.”

Mobile was later presented with a CR7 shirt by way of apology and the steward beamed as she posed with it for the cameras.

You won’t see a steward with a bigger smile today after she received @Cristiano‘s shirt 😍 pic.twitter.com/Q22Bc9tr0O

Ronaldo was on target after 13 minutes of the match in Switzerland, scoring on his first Champions League appearance since returning to United in a shock summer switch from Juventus.

But despite netting his 135th goal in the competition in what was a record-equaling 177th Champions League appearance, the night did not end well for United.

After defender Aaron Wan-Bissaka was sent off 10 minutes before half-time, Young Boys equalized in the 66th minute through Moumi Ngamaleu before a calamitous mistake from Jesse Lingard – who had replaced Ronaldo in the 72nd minute – handed the hosts victory deep into injury time.

Pooja Bhatt Slams Dabur For Taking Down An Ad Featuring Lesbians Couples: “So Much…