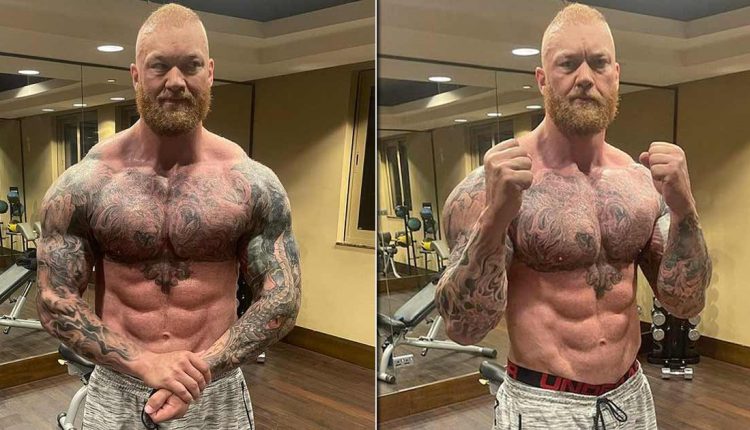 Hafthor Bjornsson, who is best known for his role of ‘The Mountain’ in the epic saga Game Of Thrones is set to take on Devon Larratt on September 18th, as the actor has undergone a crazy transformation for the match!

The Game of Thrones fame has undergone a huge physical transformation. This transformation helped the actor slim down and stay in shape for his upcoming fight to keep his status as the world’s strongest man.

It has been reported that Hafthor Bjornsson, who is now in perfect shape after his transformation, will take on Canadian professional arm wrestler Devon Larratt on September 18th, and the stage is set in Dubai.

Ed Sheeran Says American Award Shows Are Filled With ‘Hatred’, While In England “Everyone Gets Drunk & No One Really Cares”
Kajal Aggarwal & Gautam Kitchlu Expecting Their First Baby?

Check out the insane transformation below:

Hafthor Bjornsson who is a 32-year-old Icelandic actor and considered to be one of the world’s strongest men, recently took it to his Instagram account sharing a before and after pic that shows the fruits of his transformation.

The Game Of Thrones actor took his role as the Mountain in 2014, during the fourth season of the drama, and was a part of the GOT family till the end. The Mountain was in the part of the cast till the climax for the show that happened in 2019.

The Former World’s Strongest Man Eddie Hall, who was supposed to take on Hafthor Bjornsson had to unwillingly back off from the fight as he suffered a gruesome bicep injury during sparring. Because of this Eddie had to undergo surgery to reattach the imperfect muscle

Now instead of Eddie, the Canadian arm wrestler Devon Larratt has decided to step into the super-hyped bout. The rules of the fight state that it will have six rounds ( 3 minutes each) and the road will get over when either contestant is knocked out. The fighters are allowed to wear 12oz gloves and no headgear. The PPV costs USD 10.

Hafthor Bjornsson’s complete 120-pound weight loss transformation took approximately 18 months, included a diet consisting of consuming five identical, “clean,” high protein meals for six days in the week, and have a cheat day that allows him to eat whatever he wants, within reason.

Must Read: Remember Taarak Mehta Ka Ooltah Chashmah Fame Neha Mehta? Here’s What She Up To These Days!

The post Game Of Thrones’ The Mountain Undergoes A Jaw-Dropping Physical Transformation Getting Even Bulkier For A Boxing Match appeared first on Koimoi.

Flood situation in Vidarbha grim due to lack of coordination…