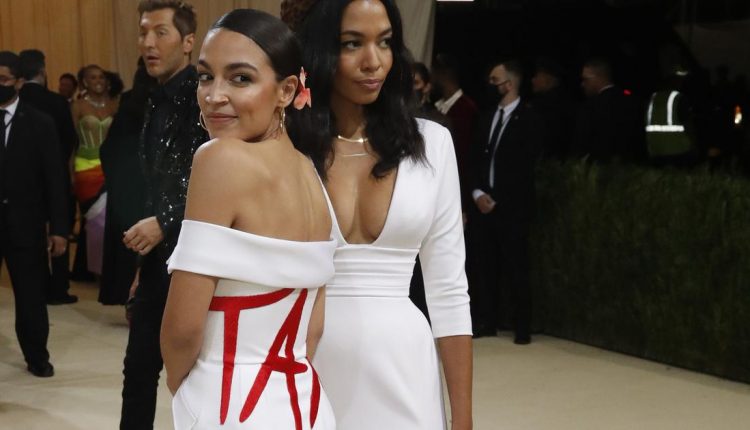 Democratic congresswoman Alexandria Ocasio-Cortez has ignited both controversy and celebration after wearing a gown to the Met Gala emblazoned in red graffiti text with the statement “Tax the Rich”.

Appearing as a guest of the Metropolitan Museum of Art at the annual fundraiser, (for which tickets cost tens of thousand dollars), the left-wing politician wore a custom gown by fashion brand Brother Vellies, bringing with her the label’s founder, the young Black designer and activist Aurora James.

Using fashion as a tool to address wider social concerns has, in fact, long been a strategy for people seeking to make change – including wearing these clothes in spaces of influence.

From 19th century Suffragettes who pounded the streets in heels, ultra-feminine dress and large “picture” hats to refute claims that they were unwomanly, to patriot textiles in the second world war, to Indigenous Australian street clothes and accessories by a brand such as Dizzy Couture today, dress has historically conveyed political messages, creating “looks” for generations of change agents.

Here are 5 clothing acts as provocations that changed history:

The founders of the American Revolution wished to break with the old codes of European aristocracy. Much of the world still had “sumptuary laws”: legal edicts that regulated the types, materials and amounts of cloth,…