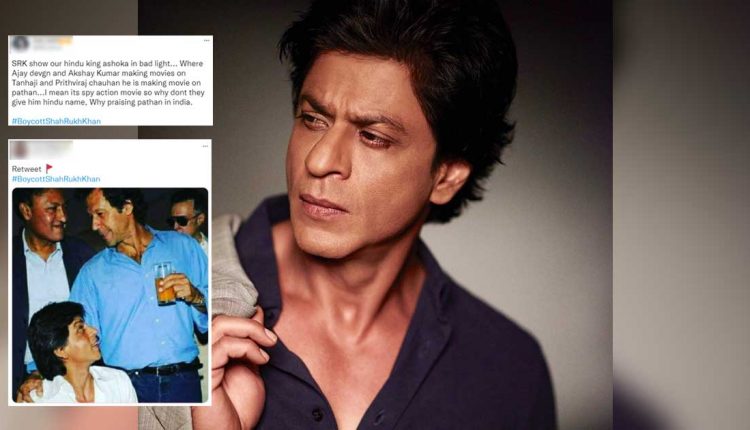 Shah Rukh Khan, King of Bollywood has just landed in a huge and nasty pit of controversy. #BoycottShahRukhKhan is the top trending on Twitter for the day! Where some netizens are questioning “Why praise Pathan in India?”

Ahead of SRK’s movie release, some Twitterati claim that the Bollywood star has seriously hurt some religious emotions, over and over again. They shared images, news clippings, and occurrences from the past where Khan was seen either backing up Pakistani cricket players or speaking of intolerance in India.

Check out a few tweets talking about boycotting Shah Rukh Khan below:

Mallika Sherawat On Losing Welcome Back Says, “The Director Cast His Girlfriend” & How She Has ‘No Boyfriend’ In Bollywood

SRK show our hindu king ashoka in bad light… Where Ajay devgn and Akshay Kumar making movies on Tanhaji and Prithviraj chauhan he is making movie on pathan…I mean its spy action movie so why dont they give him hindu name, Why praising pathan in india. #BoycottShahRukhKhan pic.twitter.com/TTQJNZD9cx

Time to show Pakistan lover @iamsrk some Intolerance by boycotting him and Continuing his streak of Consecutive Flops on Box office. Soon he will settle down in Pakistan.#BoycottShahRukhKhan pic.twitter.com/o6HeMlBPsU

Before supporting anyone
I am a Proud Indian and Hindu

However, another Twitter trend made it to the top which is SRK PRIDE OF INDIA, with Shah Rukh Khan fans standing up for him. The trend soon surpassed the boycott of SRK tweets with over 84k posts on Twitter. Khan Buffs defended the star for his achievements and stood by the belief that none of his films were made for election publicity or vested interests of any special group.

Check Out the support tweets below:

at least he didn’t make these movies for election propagandas or box-office. @iamsrk #WeLoveShahRukhKhan
SRK PRIDE OF INDIA pic.twitter.com/wOranmovsi

#ShahRukhKhan being introduced at the World Economic Forum. We are proud of you Khan Saab. Keep shining like the star you are!#WeLoveShahRukhKhan
SRK PRIDE OF INDIApic.twitter.com/2jDjGHyEET

One of the Twitter uses called Shah Rukh Khan as the Megastar, a self-made icon and one of the most charitable actors in India.

Talking about Pathan, The film’s budget has been totalled to be around 250 crores and will be starring Deepika Padukone opposite King Khan. Other actors in the film playing main roles are John Abraham and Ashutosh Rana. Salman Khan will also make a cameo appearance in Pathan.

Must Read: Sahil Khan On Harassment Allegation By Former Mr India Manoj Patil: “This Could Be A Publicity Stunt With Community Angle”

This $6 Drugstore Lip Liner Is My Secret Weapon for Full…