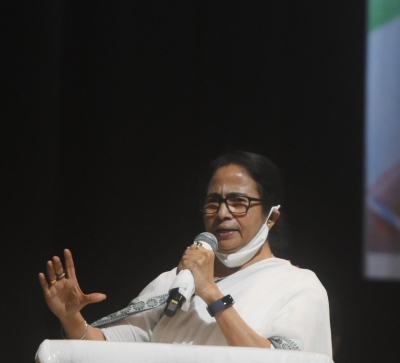 Kolkata, Sep 16 : West Bengal Chief Minister Mamata Banerjee has convened a high-level meeting with the superintendents of the medical colleges and senior officials of the state health department to discuss the rising cases of paediatric fever in the state, particularly in North Bengal.

According to a state health department statement, so far, 1,195 children have been admitted to different government hospitals in North Bengal with high fever coupled with cough and respiratory problems. The state government had formed an expert committee to examine the cases in the North Bengal Medical College and the Jalpaiguri District Hospital, which submitted a report to the state health department on Thursday.

Banerjee said after her meeting with the health officials, “The children who died had some other diseases. The state is taking every possible measure.”

The laboratory diagnosis confirmed different types of fever, which are normal during this season, including influenza and RS virus along with some cases of dengue and other respiratory illness.

On detailed enquiry by the expert committee, no specific outbreak has been found so far. All the cases were tested for Covid during admission, and so far only one case (a 17-day old baby) was found to be Covid positive. Two children have died so far.

However, the state is keeping a close vigil on the situation, and the expert team will visit the North Bengal districts again on Friday to further review of the situation.

“Higher level of diagnostic facilities for respiratory viruses is being created at the North Bengal Medical College and School of Tropical Medicine. The expert committee is developing a new standard operating procedure (SOP) and the paediatricians are being oriented to diagnose and treat this fever episode. The critical care units for paediatric cases like NICU and PICU have already been developed and are being utilised for treating more serious cases. Fortunately, the RS virus infection is generally self-limiting and gets cured in 3-5 days, and the death rate is extremely low for such infection,” a senior official of the state health department said.

Meanwhile, the widespread fever among the children has triggered political debate across the state.

The Leader of Opposition, Suvendu Adhikari, tweeted, “I urge WB Health Secretary to kindly take note of the distressing news coming from North Bengal, where more than 750 children have been admitted to hospitals for high fever and undetected flu-like symptoms. Please initiate measures at the earliest as six infants have died already.”

“WB administration seems to be occupied with the Bhabanipur by-election, as it’s their priority. So, I’d urge Union Health Minister @mansukhmandviya ji to immediately dispatch a Central team of experts to WB, to assist and aid the WB Health Dept in order to save our children,” he added.(IANS)

The post Bengal gears up to fight unknown fever among children appeared first on The Shillong Times.

Bolsonaro slams probe into his attacks on Brazil’s electoral…