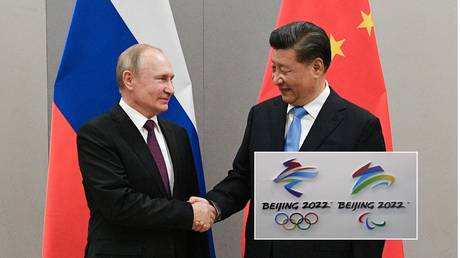 Russian President Vladimir Putin has accepted an invitation from Chinese leader Xi Jinping to attend next year’s Winter Olympics in Beijing. Putin would otherwise be banned from the event unless invited by Xi.

Russian Foreign Minister Sergey Lavrov revealed the news after a meeting with Chinese counterpart Wang Yi in the capital of Tajikistan, Dushanbe, on Thursday.

“And, of course, we hope that a summit can be held in person [between Putin and Xi] and that Chinese and Russian athletes will once again prove their highest athletic and personal qualities,” added Lavrov as he praised the warm relationship between the two neighbors.

Putin is set to attend the Games in Beijing. © Reuters

The Winter Games will be held in Beijing from February 4 to 22.

Just as at the recent Summer Olympics in Tokyo, Russian athletes will be forced to compete under neutral status due to a ban from the World Anti-Doping Agency (WADA) for allegedly tampering with data at a Moscow laboratory.

The initial WADA ruling in December 2019 slapped a four-year ban on Russia from major international competitions, but that was reduced to two years on appeal by the Court of Arbitration for Sport (CAS) last December.

The sanctions include a ban on Russian government officials and representatives from attending events such as the Olympics and world championships.

However, one proviso is that the order “does not apply to a Government Representative who is invited to a specified event by the Head of State or Prime Minister (or equivalent) of the host country of that specified event.”

Seeing as Xi has personally invited Putin, that would allow the Russian president to attend in Beijing.

Putin and Xi have formed a strong relationship in recent years. © Reuters

Some such as US anti-doping chief Travis Tygart have demanded a blanket ban on all Russian competitors – even under neutral status – while others bemoaned the presence of the blue, red and white of the Russian tricolor on athletes’ uniforms in Tokyo, even though the national anthem and any inclusion of the word ‘Russia’ was banned.

In contrast, Russian officials have asserted that many of the claims against them are politically motivated and that they have not been given a fair hearing.

‘You need to learn how to lose’: ROC throw scathing shade at ‘sore losers’ & ‘Western propaganda’ at Tokyo 2020

Competing under the banner of the Russian Olympic Committee (ROC), Russian athletes in Tokyo picked up 71 medals in total – including 20 gold – which was good enough for them to finish fifth in the overall rankings.

Putin recently hosted Russia’s returning Olympic and Paralympic medalists in special ceremonies at the Kremlin, praising their achievements in the face of difficulties including “politicized decisions”.

In turn, numerous attendees at the Kremlin event praised Putin for his continued support for sport in the country.

‘You overcame it all’: Putin cites ‘politicized decisions’ against Russian athletes as he honors Olympians in Kremlin ceremony

Is food allergy linked to ASD?