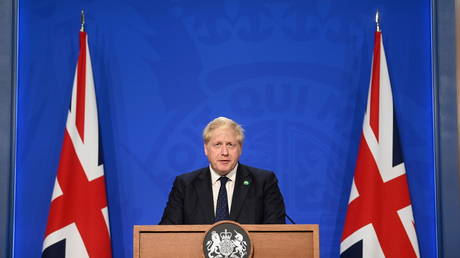 The British PM has hailed a pact between the UK, Australia and the US, which will see Canberra take delivery of nuclear-powered subs, stating the deal will help safeguard peace and security of the Indo-Pacific for years to come.

Speaking to parliament of Thursday, British Prime Minister Boris Johnson told the house that the UK and Australia are as closely aligned as any two countries in the world. “The UK and Australia defend the same interests, promote the same values, and face the same threats,” Johnson stated.

Addressing the AUKUS (Australia, UK & US) pact, announced on Wednesday night by the leaders of the three nations, Johnson hailed the move to arm Australia with nuclear-power, conventionally armed submarines.

Australia’s future possession of this capability will help to safeguard the peace and security of the Indo-Pacific.

“Nuclear submarines are the capital ships of our age, propelled by an effectively inexhaustible source of energy,” Johnson stated, adding that their capabilities would allow Australia to silently patrol vast expanses of the ocean while “gathering intelligence deterring adversaries and guarding the trade routes.”

The prime minister contended that bringing another nation into the small cadre of militaries which operate nuclear-power submarines was “a decision of the utmost gravity, requiring perhaps the closest relationship of trust that can exist between sovereign states.”

Centre says there is no community spread of COVID-19 in…