‘Are you kidding?’ Fans in disbelief at off-the-wall catch by Orioles star Mullins as he robs Yankees of home run (VIDEO) 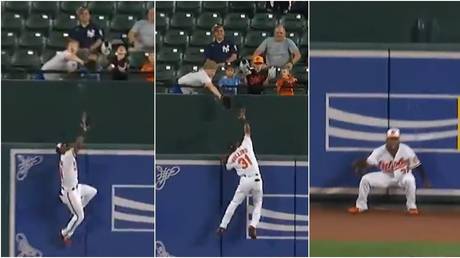 Baltimore Orioles outfielder Cedric Mullins produced a strong contender for catch of the season when he spectacularly deprived the visiting New York Yankees of a home run in their Wednesday night meeting.

With two outs in the top of the second inning, Yankees star Gary Sanchez drove a deep ball to center field, seemingly assured of a home run for his team.

But he wasn’t counting on some incredible athleticism from Mullins, who used the wall to time his jump to perfection, snatching the ball and robbing Sanchez of his homer.

“He got it! Are you kidding?” yelled the stunned commentary team. “No way! No way!”

“That was the most incredible catch,” said Orioles pitcher John Means after watching his teammate bail him out. “I was in awe.”

Likewise impressed was MLB writer Britt Ghiroli, who called it the best catch she had witnessed first-hand.

Cedric Mullins just made the best catch I’ve ever seen in person: pic.twitter.com/6v67BUjzHk

Sadly for 2021 All-Star Mullins, his efforts were ultimately in vain as Baltimore fell to a 4-3 defeat at Oriole Park – the second loss in a row in their three-game series with the Yankees.

The struggling Orioles are rock bottom of the American League Eastern standings with a 46-99 record.

‘Not doing what they had to’: Pep Guardiola lifts lid on viral touchline rant at Man City stars Mahrez & Grealish (VIDEO)

No criticism of Shiv Sena to respect Bal Thackeray’s…

Sushil Modi set to equal record of his arch-rival Lalu…