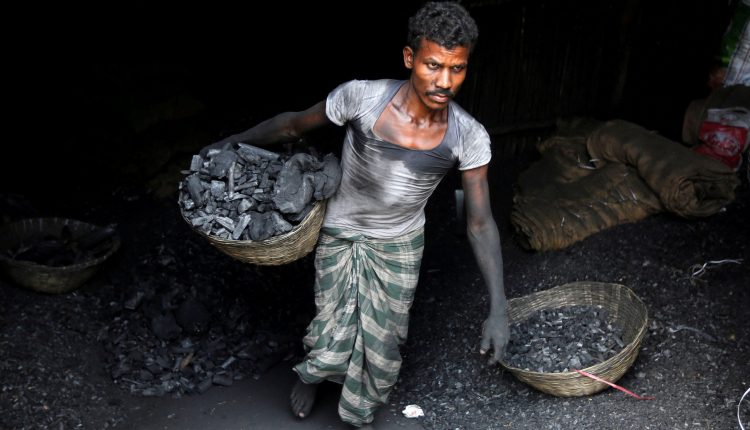 A worker carries coal in a basket in an industrial area in Mumbai, May 31, 2017. Fly ash is a product of coal combustion. Photo: Reuters/Shailesh Andrade/File Photo

India produces almost three-times as much coal ash every year as it does municipal waste.
The coal ash is stored in poorly designed and engineered facilities that often fail in catastrophic fashion, especially during the monsoons.
Coal-ash ponds across India are not subject to any regulations, engineering standards and guidelines. This is a major policy failure.

Indian coal-fired thermal power plants generate 226 million metric tonnes of toxic ash every year, on average, from burning coal. This figure is expected to grow to 600 million tonnes by 2032.

While environmental norms aspire to use the ash to the tune of 100%, rather than dispose of it, tens of millions of tonnes go unutilised every year.  And the new coal ash produced annually adds to the 1.6 billion tonnes of unutilised ‘legacy’ ash already accumulated in large unplanned coal-ash dumps or dykes across India – enough to fill a thousand Taj Mahals.

The Ministry of Environment, Forests and Climate Change estimates that ash dumps occupy nearly 40,000 hectares of land – an area almost as big as Chennai. These dumps can be dozens of meters high, and are prone to leaking and breaching, posing serious environmental and public safety threats.

From 2010 to 2020 alone, 76 coal ash pond ‘incidents’, including catastrophic breaches, were reported across India. The most notable of them was the Reliance Sasan Power disaster of April 2020, which killed six people, extensively damaged property and polluted water and soil in Singrauli, Madhya Pradesh.

Unfortunately, there are no standards governing the design and maintenance of these toxic waste dumps – and the results are all too predictable. Numerous poorly constructed ash dykes have ruptured, flooding the surrounding landscape and often burying villages with millions of tonnes of ash slurry. Many more disasters are sure to follow as millions more tonnes of coal ash piles up.

Given these realities, coal-ash management in India is an ignored crisis that requires immediate government attention. Like municipal solid waste, coal-ash management suffers from poor implementation of laws, allowing this problem to fester. Worse yet, the coal-ash crisis is magnified by the fact that almost three-times more coal ash is generated in India than municipal waste.

Policy-making on coal ash management can, however, draw several lessons from India’s solid waste management experience. The most important of these is the urgent need for scientific and engineering standards to guide disposal and other facilities.

The Delhi-based Legal Initiative for Forest and Environment (LIFE)1 examined three large ash pond failures – the Essar Mahan and the Sasan incidents in Singrauli and the Vedanta Jharsuguda plant in Odisha – and concluded that foundation slippage was probably the primary cause. That is, ash-pond structures are compromised significantly by weak foundations, which are often constructed using waste coal ash, and by frequently increasing the height of the embankments in an unplanned way.

Many ash ponds that have experienced breaches were also originally built without first thoroughly investigating the foundation. The resulting flaws in the final design are exacerbated by heavy rains during the monsoons, which soften the improperly engineered foundation materials. Note here that many of these failures are associated with pond structures constructed in the last 10 years – a time when plant operators did have access to improved design and construction methods, including those commonly applied in other countries.

Moreover, an aerial assessment of 10 coal-ash disposal facilities highlighted a variety of problems with their location, land use and engineering standards. For example, many of the ash ponds covered large areas that would otherwise have been used for agriculture. Many facilities also had significant dam structures (over 5 m high) located nearby that were in turn close to water bodies or populated areas. Most significantly, many of these facilities were huge and contained large quantities of wastewater mixed with ash – a combination that significantly increases the risks of dam failure and endangers people and agricultural land.

Perhaps the most important finding from the LIFE analysis was that many ash dykes – the structures that form the perimeters of ash ponds – are built using coal ash. When used this way, coal ash is prone to liquefaction, a process in which soil and/or coal ash are fluidised by a sudden increase in fluid pressure. The causes of several ash-pond accidents reported from across India can be traced to this phenomenon.

According to the NITI Aayog’s estimates, India will rely on coal power to a significant extent – 42-50% of the energy mix – for decades to come. This ‘ambition’ undermines our climate goals – and will also perpetuate the country’s coal-ash crisis. India’s economic stance on the continued use of coal is debatable, but its lack of policy action on ash-pond management, design and construction puts it at odds with its ethical obligation under Article 21 of the Constitution (protection of life and personal liberty).

Coal-ash ponds across India are not subject to any regulations, engineering standards and guidelines. This is a major policy failure that requires an urgent fix. The 1995 tailing dam design standards, issued by the Indian Bureau of Mines, provides a good start for the development of new, updated standards.

Given the gravity of the coal-ash crisis in India, regulating coal-ash ponds with clear and enforceable requirements and implementation deadlines is the clear first step.

Dharmesh Shah is a senior technical advisor with the Delhi-based Lawyers’ Initiative for Forests and Environment (LIFE).

The author is affiliated with this organisation.↩

Privileged to carry mantle of my ancestors: Anurag Thakur on…