‘Who is George Floyd to our footballers?’ Russian ex-FIFA official responds after Zenit foreign stars take knee vs Chelsea 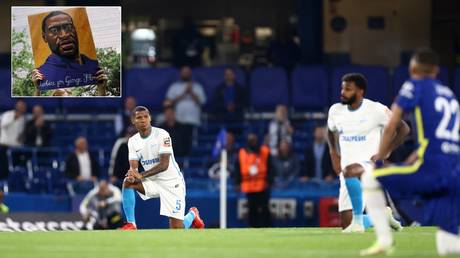 Football has nothing to do with the death of George Floyd and players should stop taking a knee, former FIFA vice-president Vyacheslav Koloskov has said after several Zenit stars performed the action before their game at Chelsea.

The Londoners hosted the Russian club at Stamford Bridge for a Champions League meeting on Tuesday night, and before kick-off players from the home team as well as several of Zenit’s foreign contingent all dropped to one knee.

The gesture remains commonplace in matches across Europe more than one year on from the death of black US man George Floyd at the hands of white police officer Derek Chauvin.

Russian players on the Zenit team did not drop to one knee, nor did Ukrainian center-back Yaroslav Rakitskiy.

On the Chelsea side, Spanish defender Marcos Alonso also didn’t appear to perform the gesture.

One man who thinks the act has run its course is Koloskov, who served at FIFA between 1980 and 1996 and is an honorary president of the Russian Football Union (RFU).

“In general, I think this action is absolutely unnecessary and unacceptable,” said the 70-year-old, Sport24 reported.

“The fact that our players didn’t kneel is natural. Who is Floyd for our footballers? This is, in principle, a criminal personality, but what does football have to do with it?

“This action has been going on for the second season, it’s not clear what they are demonstrating by this.

“They knelt, and that’s enough. The second season, the third season, how much longer? Whoever wanted to do it has already paid their dues enough.”

Koloskov is not in support of the gesture. © Sputnik

Players at Russian clubs – including foreign stars – don’t customarily kneel before domestic matches, but on Tuesday in London a host of Zenit names did, with Brazilian quartet Malcom, Claudinho, Wendel and Douglas Santos all kneeling, as well as Colombian midfielder Wilmar Barrios and Iranian forward Sardar Azmoun.

“Of course, this action cannot be canceled by law – there will be accusations of racism and so on,” added Koloskov.

‘Finally we have a killer’: Lukaku hailed as ‘difference maker’ after bailing out lackluster Chelsea against Zenit resistance

“But it is necessary to hint at this: it’s alien to football. The fact that Zenit’s legionnaires [foreigners] supported the action is their own business, let them do it if they want to.

“Although it’s not clear what Brazil has to do with this. But this topic doesn’t deserve our attention, enough dwelling on it.”

A vocal proponent of taking the knee is Chelsea forward Romelu Lukaku, who scored the decisive goal in Tuesday’s meeting with his 69th-minute header.

Some fans claimed that was some kind of ‘payback’ for the Russian players for not following suit,

I hope that the Zenit players who refused to take a knee enjoyed Big Rom’s goal. #CFC pic.twitter.com/1qb2nvkKID

Zenit manager Sergey Semak made his feelings clear after the game, supporting the right to make the gesture but asserting that he would not be doing it anytime soon.

“This is a personal right of every person. I have a different opinion,” said the Zenit manager.

“I respect the rights of all people absolutely. [But] I’m ready to kneel before God.”

Semak supports freedom of choice but won’t be kneeling. © Reuters

No plan for military attack on Syria: Canada