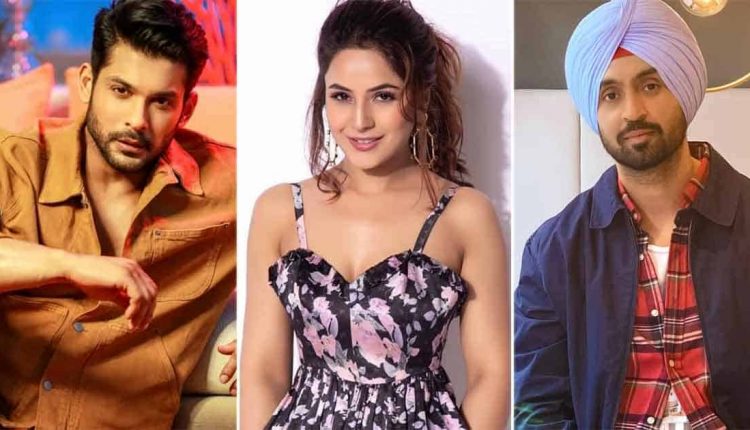 Popular Tv actor Sidharth Shukla’s untimely demise came as a shock for many. His family and friends are still coming to terms with his sudden death. His rumoured girlfriend Shehnaaz Gill also went through a tough time following the death of the actor.

As Sidhath’s mother has been supportive to Sana and wants her to get back to work and lead a normal life, Punjabi singer-actor Diljit has shared an update regarding their upcoming film.

Diljit Dosanjh announced a romantic comedy film with the Shehnaaz Gill a while ago and were shooting for the same in Canada. The singer turned actor has now hinted at the release of the teaser of the film and this might come as good news for all Sidnaaz fans.

Karan Mehra Slams Estranged Wife Nisha Rawal: “I’m Out Of My House While She & Her Brother Are There, Araam Se”

Diljit Dosanjh took to Instagram stories on Wednesday and shared that he will soon start dubbing the songs for the film. The singer further revealed that the teaser of Honsla Rakh will be released soon. Isn’t that good news for Shehnaaz Gill fans?

Take a look at the video clip below:

The update left fans of Diljit and Shehnaaz Gill all excited and they can’t wait to witness the pairing. Check out some of the Twitter reactions below:

Diljit has hinted that #HonslaRakh’s teaser/trailer is going to drop soon.
It can release any day now so please be ready for it.#ShehnaazGill#Shehnaazians

Diljit has hinted that #HonslaRakh’s teaser/trailer is going to drop soon.
It can release any day now so please be ready for it.#ShehnaazGill#Shehnaazians

Some fans even showed support to Shehnaaz Gill after the demise of actor Sidharth Shukla. One user even tweeted, “More power to @ishehnaaz_gill Come back stronger…take your time. We are waiting. Super excited to watch your movie #HonslaRakh …Love you Red heart #ShehnaazGill”

Will get to see shehnaaz in #HonslaRakh songs, trailer, bts, maybe promotions, and finally in movie itself … Emotional right now

As #Shehnaazians it’s our duty to promote #HonslaRakh to the best of our ability. Ab boss jo DHAMAKA hoga, duniya dekhegi. @ishehnaaz_gill

For the unversed, Shehnaaz Gill and Diljit Dosanjh completed the shoot for the film in Canada. After the film’s wrap in April this year, Diljit had shared pictures. The film also stars Punjabi actor Sonam Bajwa and Gippy Grewal’s son Shinda Grewal.

The post Shehnaaz Gill Fans To Get A Good News Amid All The Sidharth Shukla’s Sadness & It Has A Diljit Dosanjh Connect appeared first on Koimoi.

When Will Salman Khan Get Married? Arbaaz Khan Says “Thak Gaye Yaar” As Anil Kapoor Jokes About It

Centre to give ‘more power’ to tribal communities in…