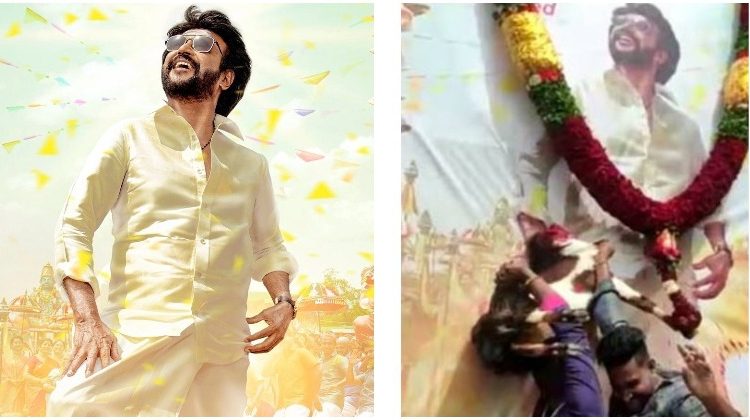 There would hardly be any Indian who is oblivious to the megastardom and cult following that South superstar Rajinikanth enjoys.

Lovingly called ‘Thalaiva’, he is in fact treated like a God down South. He is legit worshipped by his fans and his pictures and posters of his movies are revered by having milk poured on them.

While that is pretty common for Thalaiva fans to do, in a recent incident, a group of his fans were seen celebrating the first look of Rajinikanth’s upcoming movie Annaatthe in a rather unusual way.

Annaatthe is set to release this Diwali and would see stars like Nayanthara, Keerthy Suresh, Meena, Khushbu, Soori, Sathish sharing the screen with Thalaiva who is playing a village chief in the movie.

The first glimpse was released by Sun Pictures and fans found the strangest way to express their excitement for the movie.

Some people sacrificed a goat and sprinkled its blood on the poster. The horrific pictures and video went viral on social media and irked everyone who saw it.

In the video, some men, who are believed to be Rajinikanth’s fans, are seen slaying a goat and smearing it’s bloodied body on the poster.

The visuals are highly disturbing and speak of the sheer madness and lengths people go to for the celebrities.

In a statement, V M Sudhakar who is close to the actor and administers his fan club All India Rajinikanth Rasikar Mandram said “this is not only regrettable but also strongly condemnable,” further adding a plea for such so-called fans, “We request that nobody should be involved in such obnoxious acts.”

It has happened earlier once though when Rajinikanth’s 2.0 was released. Fans slaughtered goats to celebrate the release.

However, this is no way to show your love for the film or the actor. What are your thoughts on this?

Four New iPhones, Two New iPads And An All New Apple Watch – Everything Apple Unveiled At Its Big September 2021 Event