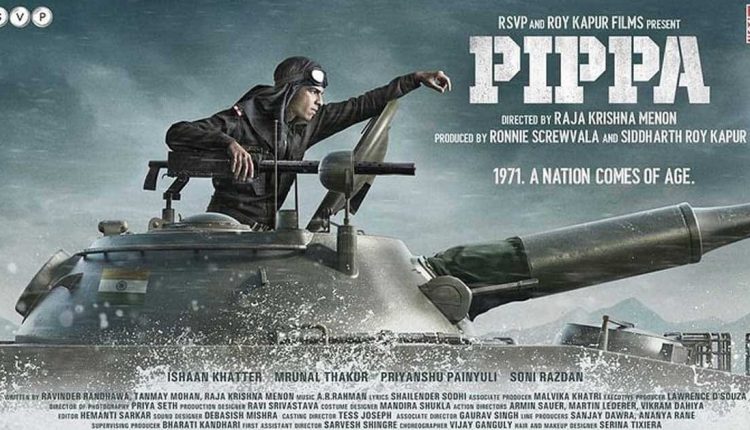 Actor Ishaan Khatter has commenced shooting for the first schedule of his upcoming war film Pippa in Amritsar on Wednesday. The makers have also revealed the first look of the film.

The still shows Ishaan as Brigadier Balram Singh Mehta. The still also bears the tagline: “1971: A Nation Comes of Age”.

Director Raja Krishna Menon said: “I’m beyond excited to venture into the field with our amazing cast and crew. We’ve all been prepping hard for this day, and I cannot wait to bring this incredible story of valour and liberty to the audiences.”

After Ajay Devgn, Vicky Kaushal Is Ready For Adventure On ‘Into The Wild With Bear Grylls’

Check out the first look shared by Ishaan Khatter below:

Producer Ronnie Screwvala (RSVP) said: “Kicking off the schedule on such a positive note ensures a steady momentum throughout the course of the production. We’re raring to go with a brilliant ensemble cast and filmmaker Raja Krishna Menon, who has a savvy eye for war films.”

Producer Siddharth Roy Kapur (Roy Kapur Films) added: “From the time I first heard this amazing story of the bravery and resilience of a family on the frontlines of a just war, I knew it had to be told.”

Roy Kapur also shared that “the team is excited to hit the floors today and we hope to bring our audiences a very special cinematic experience in theatres next year.”

Based on ‘The Burning Chaffees’ written by Brigadier Balram Singh Mehta and scored by Oscar-winning composer A.R. Rahman, ‘Pippa’ is a heroic tank battle film that underscores the bravery of Brigadier Mehta, a veteran of the 45th Cavalry tank squadron, who, along with his siblings, fought on the eastern front during the Indo-Pakistan War of 1971, which led to the liberation of India’s neighbour Bangladesh.

Must Read: Alia Bhatt Once Rated Varun Dhawan’s Kissing Skills, Can You Guess The Number?

Ahead of hybrid hearing, majority of SC judges vaccinated

UP CM Adityanath pays tribute to soldier killed in Arunachal…