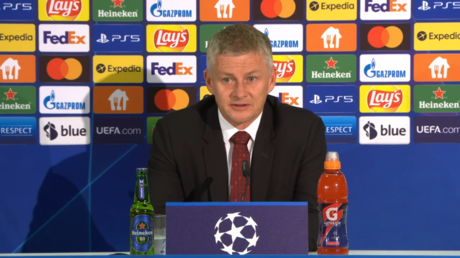 Ole Gunnar Solskjaer has defended his decision to replace Cristiano Ronaldo with Jesse Lingard against Swiss underdogs Young Boys, which paved the way for an embarrassing opening-day Champions League defeat for Manchester United.

Ronaldo had given United the perfect start after 13 minutes of their Champions League opener in Bern when he turned in a pinpoint cross from countryman Bruno Fernandes.

The finish was Ronaldo’s third in two games since rejoining United from Juventus in a shock summer move, and was his 135th in a record-equaling 177 games in the Champions League.

But United’s night was complicated with a straight red card for Aaron Wan-Bissaka in the 35th minute after his lunging tackle on Christopher Martins.

United held on until the 66th minute, when Moumi Ngamaleu equalized for the hosts, prompting Solskjaer to make a double-substitution six minutes later when Ronaldo and Fernandes were replaced by Lingard and Nemanja Matic respectively.

But the tactic backfired spectacularly when Lingard gifted Young Boys a winner deep into injury time at the Wankdorf Stadium when his sloppy backpass was seized upon by Jordan Siebatcheu.

Ole sent Lingard to change the game and he changed it with a 95th min assist pic.twitter.com/2dDgdUM1bf

The defeat left Solskjaer facing questions over his in-game management, but the Norwegian spoke on his substitutions when he fronted up after the match.

“The game had gone 70-odd minutes, they’d been running a lot, both Saturday and today. The Astro-turf takes its toll as well,” Solskjaer said of his decision to bring Ronaldo and Fernandes off.

“We wanted Nemanja’s experience to keep hold of the ball, and Jesse’s legs,” added the United boss.

“Ronaldo is exceptional… But we have to look after him as well and it felt like the right moment to take him off.”

Solskjaer’s team went down to defeat in Switzerland. © Reuters

Speaking on Lingard’s late horror show, Solskjaer said: “That’s football for you at the highest level. Lack of concentration, make a mistake, and you get punished.

“We did that last year in Europe, we conceded two very sloppy counter-attacks against Basaksehir and we lost that game.

“Today, in the last seconds, Jesse just wants to play it safe and one misplaced pass and you’ve conceded a goal, that happens in football.”

After slipping up in the Swiss capital, Solskjaer said United’s task had been made more difficult in a group also containing Villarreal and Atalanta – who drew their opener 2-2 in Spain on Tuesday.

“We know we’ve given ourselves a more difficult task than maybe last year, but everyone thought we were through after two games last year.

“You need 10, maybe 12 points, you need to win your home games and maybe one away from home.”

13% – Manchester United have lost seven of their 11 UEFA Champions League matches under Ole Gunnar Solskjær. 13% of their total defeats in the competition have come under Solskjær (7/54), despite the Norwegian only being in charge for 4.8% of their matches (11/231). Fall. pic.twitter.com/5e49OVY63B

Next up in the Champions League for United is a visit to Old Trafford on September 29 from Villarreal, the team who beat them in the Europa League final back in May.

Watch: A remembrance in videos of ‘SNL’ comedian Norm Macdonald, who has died at 61

How much will our oceans warm and cause sea levels to rise this century?