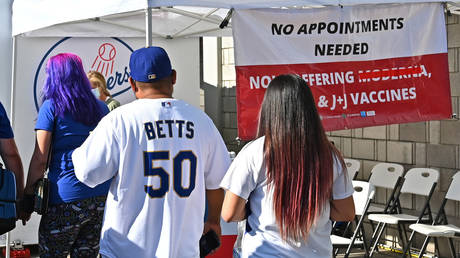 Los Angeles County plans to require proof of vaccination to enter indoor bars and nightclubs, while those attending NFL games and other large outdoor events must show that they’ve been inoculated or tested negative for Covid-19.

The new vaccine order will be issued later this week, the county’s public health officer said on Wednesday. Customers and workers at indoor bars, nightclubs, wineries, breweries and lounges will have to show proof of at least one jab by October 7 and full vaccination by November 4, the health officer, Dr. Barbara Ferrer, announced.

Mask mandates and vaccine passports are a performance, a taking of the knee to a warped health-and-safety morality

The most populous US county stopped short of manding proof of vaccination for restaurants, but it will strongly recommend jab verifications for indoor dining. All fans, workers and participants at outdoor events attended by 10,000 or more people – such as Los Angeles Dodgers baseball games and Los Angeles Rams and Los Angeles Chargers football games – will be forced to show proof of vaccination or a negative Covid-19 test within the past 72 hours.

The requirement for outdoor events will go into effect on October 7. Los Angeles already requires proof of vaccination or a negative virus test for indoor events attended by 5,000 or more people.

“This modified health officer order aligns with the continued need to reduce risk of transmission and increase vaccination coverage,” Ferrer said. “This is a reasonable path forward that will position us to be better able to break the cycle of surges.”

However, compulsory vaccine passports have apparently failed to “break the cycle of surges” in places such as Israel, which has seen record Covid-19 infections in recent weeks despite an onerous “Green Pass” system and the world’s most aggressive booster-shot program. Israeli Health Minister Nitzan Horowitz was caught on Sunday on a hot mic, saying in some cases there’s no medical justification for vaccine passports, but they are intended to pressure unvaccinated people to get the shots.

About 68% of Los Angeles County residents 12 and older have been fully vaccinated against Covid-19, exceeding the nationwide average of 63%. The county brought back its mask mandate in July, requiring them to be worn indoors regardless of vaccination status.

The latest vaccine requirement came to light one day after California Governor Gavin Newsom, who has championed some of the nation’s most stringent Covid-19 restrictions, defeated a recall effort.

CDS: Days of frontal attack over, technology need of hour

‘Half truth, Centre has done nothing to help Bengal…