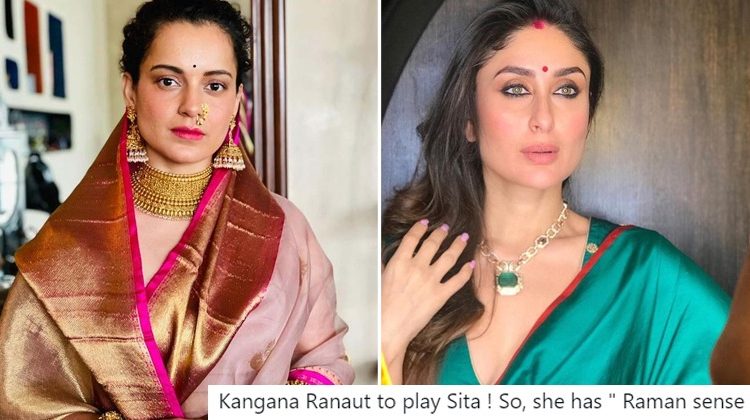 Kangana Ranaut is now all set to play the role of Sita in a film titled Sita: The Incarnation. This film was earlier offered to Kareena Kapoor Khan.

Sita: The Incarnation will be directed by Alaukik Desai. Kangana Ranaut also recently shared the poster of the upcoming film on her Instagram stories and thanked the director for giving her this opportunity.

Kangana took to Instagram stories and posted a screenshot of the tweet and wrote, “What was a mirage, is now clarity. A dream of a pious character never explored is now a reality. I am ecstatic to bring Kangana Ranaut on board as Sita. This pious journey will change the course of how we perceive our mythology. Thank you SS Studio for your immense support and belief,” the director tweeted. Kangana shared a screenshot of the tweet and wrote.”

According to the reports, Kareena Kapoor Khan had demanded Rs 12 crore for the film. The actor in a recent interview didn’t comment on whether she said so.

She said in an interview with The Guardian, “I make it quite clear what I want and I think that respect should be given. It’s not about being demanding, it’s about being respectful towards women. And I think things are kind of changing.”

She added, “Just a few years ago, no one would talk about a man or woman actually getting equal pay in a movie. Now there are a lot of us being very vocal about it.”

Here’s what people have to say about this-

#KanganaRanaut appears to have won the competition to play #Sita. #Kangana is scheduled to play the mythical character in her forthcoming film The Incarnation – SITA, directed by Alaukik Desai. KV Vijayendra Prasad, a seasoned screenwriter, wrote the film’s story.

Kangana Ranaut to play Sita ! So, she has ” Raman sense “!

Apparently Kangana Ranaut will now play the role of Maa Sita in the upcoming Bollywood drama “Sita: The Incarnation.” No offence to Kangana, but honestly can this industry just stay away from Hinduism.

Kangana was recently seen in the political film Thalaivii. She will be next seen in action films Dhaakad and Tejas.