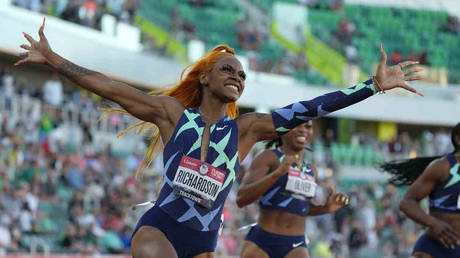 The World Anti-Doping Agency (WADA) has announced it will review if cannabis should remain on its list of banned substances, months after US star Sha’Carri Richardson missed the Olympics after testing positive.

WADA said on Tuesday that a scientific review into the psychoactive substance will be undertaken as more territories, particularly various states within the US, relax their guidelines on the drug.

This comes after American sprinter Richardson was handed a one-month ban after she tested positive for marijuana following June’s Olympic trials, shortly after registering the sixth fastest time in history earlier this year.

However, her positive test, the rulebooks dictated, meant that her scores were scrubbed from the US pre-Games trials.

“Following receipt of requests from a number of stakeholders, the [executive committee] endorsed the decision of the List Expert Advisory Group to initiate in 2022 a scientific review of the status of cannabis,” read a statement from WADA.

“Cannabis is currently prohibited in competition and will continue to be in 2022.”

Richardson explained her positive test by saying that she had turned to the drug after as means to help herself overcome the death of her mother – and the one-month suspension which left her Olympic 100m sprint dreams in ruins opened up a wide outpouring of sympathy for the 21-year-old and led to calls that WADA review if cannabis should still be banned.

The potential policy change comes as 18 states in America have opted to legalize the recreational use of cannabis, with several more expected to follow suit.

The move could also represent a sea-change within top level sport as it related to marijuana usage. For the first time ever, the NFL adapted its own drug-testing policies this year to reveal that players won’t be subject to testing for THC (the psychoactive element of cannabis) as part of its random drug-testing, though several other banned substances remain on the list of drugs which can be flagged.

The above came about as part of a bargaining agreeing launched by the NFL Players’ Association – with the opening date of this plan being announced on April 20, a date on which marijuana rights are typically celebrated in the United States and elsewhere.

Some estimates have suggested that anywhere between 50 and 90% of NFL players are users of cannabis.

It was also announced by the UFC and its drug regulator, USADA, earlier this year that fighters who test positive for marijuana will no longer be punished unless “further evidence demonstrates the substance was taken for performance-enhancing purposes.”

This also represents a change of tack in the UFC’s banned substance standards and practices and comes several years after popular UFC figure Nick Diaz was handed a five-year ban after failing several drug tests for marijuana. He has never failed a test for any other banned substance.

And while this change has come to late for the likes of Diaz and Richardson, others will remark that it’s high time that top level sport progressively move with the times and removed the focus from a drug that experts state has negligible performance enhancing properties.

Ballache: US star Sandgren disqualified for striking judge’s backside – moments after player got ‘hit in the nuts’ (VIDEO)

Saif Ali Khan Chooses One Between Sacred Games & Tandav, Says “[Guess] Was More Real Than The Other”

Jake Gyllenhaal Talks About Being A Proud Uncle To Sister Maggie’s Kids: “They Find Trees More Interesting Than Phones,…

On a musical note