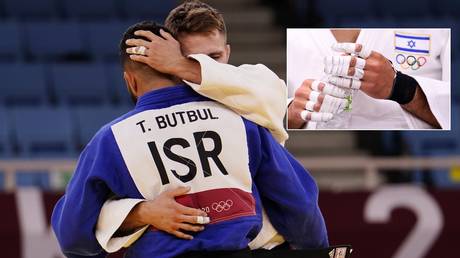 Judo star Fethi Nourine and his coach have received 10-year bans from the from the International Judo Federation for “promotion of political and religious propaganda” after refusing to compete against an Israeli opponent in Tokyo.

Nourine was paired with Sudan’s Mohamed Abdalrasool in the Olympic 73kg tournament in a contest which would have seen the winner taking on Israel’s Tohar Butbul in the following round.

However, Nourine soon announced that his support for Palestine ruled out the possibility that he would consider competing against an Israeli opponent, prompting the Algerian Olympic Committee (AOC) to withdraw Olympic accreditation from both Nourine and his coach, Amar Benikhlef.

Both were sent home from the Games by the AOC – but the punishments being handed down to the two men isn’t stopping there after it was revealed that the International Judo Federation (IJF) has also come down hard on the pair for what it sees as an unnecessary merging of sport and politics.

In their determination, the IJF strongly rebuked both Nourine and Benikhlef for using their participation in the Olympics “as a platform for protest and promotion of political and religious propaganda” which they say is in violation of the code of ethics at the heart of the Olympic charter.

As such, the IJF stated that they are suspending both from competition until July 23, 2031 – a move which would effectively end Nourine’s judo career, but this will likely be appealed to the Court of Arbitration for Sport (CAS).

Nourine’s political loyalties have led to him testing the IJF’s patience in the past. In 2019 he withdrew from the 2019 World Championships, which were also in Tokyo, after it again looked likely that he would have to take on an Israeli competitor.

In fact, judo seems to have become an unlikely battleground when it comes to Israel and Palestinian affairs.

At the 2016 Olympics in Rio de Janeiro, Egypt’s Islam El Shehaby announced he was quitting the sport just hours after he refused to shake hands with Israel’s Or Sasson.

In April of this year, Iran’s judo team were handed a four-year ban by the IJF for “repeated and very severe breaches” of their code of ethics after they were found to have put pressure on their judokas to refuse to compete against an Israeli opponent.

Some on social media backed the IJF’s determination in handing out a stern penalty to Nourine, for what many are seeing as an act which goes against the inclusive spirit of sports.

“Fair judgement. You don’t bring politics to sports,” wrote one on Twitter, while another hit out at what they claim is the Algerian’s “bigotry“.

“This behavior has no place in the Olympics,” added a third.

IPL 2021: Gambhir on CSK’s ‘biggest challenge’, the pressure on Kohli, Gayle as opener, and more

Cameroon draws 1-1 with Mali at Afcon