Virginia fears Afghanistan evacuees may have exposed locals to MEASLES, but says high vaccination rate means no reason for panic 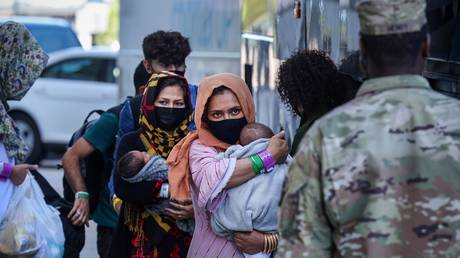 The Virginia Department of Health says it is reaching out to people potentially exposed to measles by at least five evacuees from Afghanistan over the past week, at the Dulles airport, Fort Pickett, and a Richmond area hospital.

The VDH flagged several northern Virginia locations for potential exposure to measles last week, but confirmed on Tuesday that five individuals have actually been diagnosed with the viral disease.

“The people confirmed to have measles recently traveled from Afghanistan as part of the United States government’s emergency evacuation efforts,” the VDH said in a statement, adding that it was “reaching out to people” who may have been exposed.

The Washington Dulles International Airport, an unnamed hospital in the state capital of Richmond, and the US Army base called Fort Pickett in nearby Nottoway County were mentioned as potential locations sites.

More than 110,000 Afghan nationals were evacuated by the US during the two-week airlift from Kabul, after the Taliban took control of Afghanistan. Tens of thousands have already been brought into the US, despite concerns over their health status and – in some cases – even identity.

Child brides & terrorist ties? US struggles to identify many of 100k+ Afghans it evacuated from Kabul

Flights bringing in Afghan refugees were temporarily paused last week after a total of six suspected cases of measles were identified at the Dulles airport, the main international hub for the US capital, and an Army base in Wisconsin. The moratorium remains in effect, a White House official told reporters on Tuesday, until the refugees can be vaccinated against measles at US military bases overseas.

The VDH said there was no reason for the general public to be alarmed, since most Americans are required to get the “safe and effective” MMR vaccine as young children, which confers lifetime immunity.

Measles, also known as rubeola, is a highly contagious viral disease that spreads through droplets expelled by coughing and sneezing. Most Americans have been vaccinated against it as young children, but it is endemic in some parts of the world, such as Afghanistan.

The US had a major measles outbreak in 2019, almost losing its WHO status for having eliminated the disease. Over 1,000 cases were attributed by the Centers for Disease Control and Prevention (CDC) to just two travelers returning from overseas and bringing the virus into the “pockets of low vaccination coverage and variable vaccine acceptance” among the Orthodox Jewish communities in New York city and state.

Dakar Rally expected to attract over 1.5 mn spectators in…