‘Finally we have a killer’: Lukaku hailed as ‘difference maker’ after bailing out lackluster Chelsea against Zenit resistance 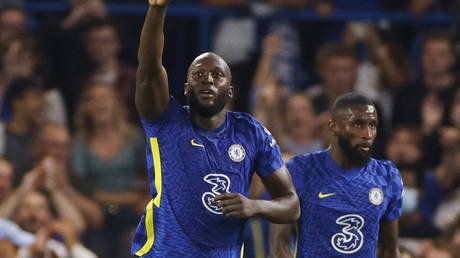 Romelu Lukaku came to the rescue for a subdued Chelsea as they struggled against Russian visitors Zenit St. Petersburg in their Champions League opener at Stamford Bridge before the big Belgian broke the deadlock.

Just as it looked as if Russian champions Zenit might hold out for a worthy point, Lukaku drifted off the shoulder of defender Dmitri Chistyakov in the 69th minute to head home an inch-perfect cross from Chelsea skipper Cesar Azpilicueta.

Up to that point, the reigning Champions League holders had labored against a well-organized Zenit team which set up with a low block but offered the occasional threat on the counter attack.

Chelsea’s lack of spark in front of the first full house for a European night at Stamford Bridge since the pandemic will have worried manager Thomas Tuchel, but in the summer acquisition of Lukaku he knows he has a get-out-of-jail card.

The big Belgian, 28, has so far looked value for every penny of the club record £97.5 million that Chelsea owner Roman Abramovich was persuaded to splash out ahead of the season.

After returning from Inter Milan for a second spell in London, Lukaku now has his first Champions League goal for the Blues to add to the three he has scored in Premier League competition thus far this campaign.

Online, Blues fans were singing Lukaku’s praises as the missing piece in their puzzle as they look to challenge again in Europe and on the home front – despite what was largely another flat performance.

“Lukaku doesn’t need a second chance. We finally have a killer in front of goal again & it feels so good!” gushed one fan, summing up the mood.

“One chance for Lukaku, one goal,” added reporter Matt Law of the clinical Belgian.

“Lukaku will be the difference maker for us this season,” said another member of the Chelsea faithful.

How many times have we seen Azpi whip crosses as good as this. 😍

Lukaku doesn’t need a second chance. We finally have a killer in front of goal again & it feels so good!🙌💙🔥 pic.twitter.com/KVl6vTTsow

That’s a superb header. One chance for Lukaku, one goal.

Seven goals in six games for club and country this season for Romelu Lukaku. He’s on absolute fire. #CFC

Lukaku will be the difference maker for us this season! These are the kinda games when you’re not at your best & you need a clinical finisher to convert these half chances into goals to save the game. And these were exactly the kinda games where we were dropping points previously

What a player Lukaku is. He is turning draws or losses into wins. I was just about to write how stifled Chelsea were creatively.

The narrow defeat was tough to take for Zenit, from whom little had been expected before the match.

Marshalled by the largely excellent Yaroslav Rakitskiy at the back, the Russians had looked compact and well organized as they frustrated the sluggish hosts.

Despite the defeat, Zenit will take some heart from making Chelsea work for the win as both teams navigate a group which also contains Juventus and Swedish underdogs Malmo.

US has 1M new coronavirus cases this month