Referencing Biles and Osaka, ill-informed detractors are taking glee at Djokovic’s US Open tears – they should learn the facts 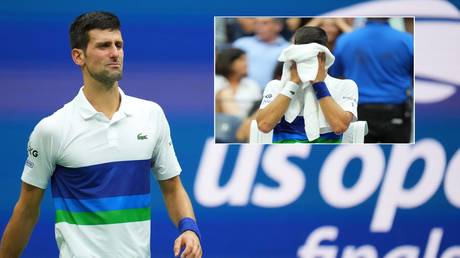 Novak Djokovic’s tearful defeat to Daniil Medvedev in the US Open final should serve to shift the narrative on the Serbian icon – but it can only do so if people get their facts straight first.

As he sat in his chair, wiping sweat from his face with a towel and preparing for what would be the final game of his loss to Daniil Medvedev at Flushing Meadows, the emotion all got too much for Novak Djokovic.

Ordinarily, Djokovic is known as a man of steel, a competitor unlike any other in tennis – and perhaps anywhere else in sport.

This, however, was a different side to the Serb.

Needing a miracle to stay in the match against an inspired Medvedev, Djokovic was confronted with the reality that his tilt for a historic calendar Grand Slam – and a record 21st Major overall – was unraveling.

The tears came and the cameras picked them up; Djokovic was still red-eyed as he rose from his chair to face Medvedev for what would be the final game in a straight-sets defeat.

Wow. This is some pressure. pic.twitter.com/6RYOwXFNFa

Some of the immediate speculation was that the pressure had all been too much for Djokovic, that he was crumbling as his dream of becoming the first man in more than 50 years to win all four Slams in the same year slipped away in the New York night.

The reality, though, was something different.

These were emotions not born of despair at his fate, or even of Djokovic suddenly cracking under the intensity.

Instead, the tears emanated from a New York crowd which was showing Djokovic the kind of affection with which he has rarely been bestowed on big occasions throughout his career.

Still tearful, Djokovic confirmed as much in his post-match interview, saying: “You guys touched my soul. I’ve never felt like this in New York.”

All the feels from @DjokerNole to the fans in New York. pic.twitter.com/PnEHevMVKk

Locked in his three-way battle with Rafael Nadal and Roger Federer, Djokovic has always been the least-loved of the trio, something of an outsider. Admittedly that narrative is sometimes over-egged, but even Djokovic himself would probably agree that it at least partly rings true.

At Wimbledon earlier this season, one journalist even began his question by asking Djokovic how it feels to be “a bad guy” compared to his illustrious Swiss and Spanish rivals.

Likewise on court, the Serb’s post-match celebration – which famously involves throwing his arms out wide, spreading ‘positivity’ to the crowd – is a move that isn’t always reciprocated.

Djokovic has had plenty to celebrate in his career. © USA Today Sports

Part of the reluctance to embrace Djokovic comes from his on-court belligerence, his win-at-all-costs mentality; another part of it undoubtedly stems from his non-mainstream views off the court – not least his thoughts on vaccines and alternative medicine, as well as the debacle of his ill-fated Adria Tour last year.

The result has manifested itself in a begrudging respect for Djokovic as he racked up his haul of 20 Grand Slam titles, rather than the unfettered adulation enjoyed by Federer, and to a less extent Nadal.

That’s why the turnaround on Sunday was particularly remarkable: from the outset it was Djokovic who was being willed to win by the vast majority of the crowd at Arthur Ashe Stadium.

It’s also why Djokovic’s post-match words felt genuine rather than forced, and the moment felt cathartic for both the world number one and tennis fans as a potential signpost for a turning point in their relationship.

Djokovic said he was touched by the New York crowd. © USA Today Sports

Most would admit it was heartwarming, but anyone straying onto social media, however, might have been confronted with a different narrative.

Indeed, here were some people reveling in Djokovic’s despair, seeing it as a moral victory against a man whose comments on the ability to handle pressure have been widely misconstrued.

Specifically, Djokovic was widely accused of targeting US gymnast Simone Bile after her withdrawal from the Olympic Games in August.

Djokovic was widely misconstrued regarding the situation with Simone Biles. © Reuters

When asked about the intensity of life in elite sport, Djokovic replied that “pressure is a privilege.”

“Without pressure, there is no professional sport. If you are aiming to be at the top of the game, you better start learning how to deal with pressure and how to cope with those moments,” said the world number one.

Some took that as a dig at Biles – but far from it. Instead, it was simply a comment on how Djokovic sums up his own approach to pressure – as the Reuters reporter who asked him the question later clarified.

Predictably though, the quote began to be thrown back in his face by gleeful fans on Sunday night.

Djokovic: “If you are aiming to be at the top of the game you better start learning how to deal with pressure and how to cope with those moments” #USOpen pic.twitter.com/NLr5W4iXsd

Novak Djokovic, tell us some more about Simone Biles not being able to handle the pressure. #usopen

Likewise, Djokovic was accused by some of “bluntly slamming” Japanese star Naomi Osaka when she pulled out of the French Open following her media boycott earlier this season.

“I understand that press conferences sometimes can be very unpleasant… But it is part of the sport and part of your life on the tour. This is something we have to do, otherwise we’ll get fined,” Djokovic had said at the time.

Hardly a damning indictment of Osaka, but again, in some quarters Djokovic was styled as the cold, heartless bad guy – no matter that he soon publicly stated that Osaka was being “brave and bold” with her decision. Indeed, the Japanese star herself cited Djokovic as among those to reach out to her to offer support.

But on Sunday night, Osaka and Biles popped up in the context of Djokovic’s tears, the message seemingly being ‘Ha! It serves you right!’

Djokovic was supposedly cracking under the pressure when he had apparently mocked others for doing so in the past.

Djokovic telling Women to toughen up during the Osaka saga at the French open when he, himself can’t control his anger. #USOpen #USOpenFinal #USOpen2021 #Djokovic

Watching Djokovic cry mid-match courtside, couldn’t help but think of a month or so ago when, regarding Naomi Osaka, he said, “Pressure is a privilege… If you are aiming to be at the top of the game you better start learning how to deal with pressure.”

As outlined – that was never the reality, and direct comparisons with Osaka and Biles are in any case spurious.

Djokovic did struggle to hit his usual heights against Medvedev, but the Russian world number two was enjoying what was arguably the match of his life. Nor had Medvedev had to come through a grueling five-set semi-final epic just days previously, as Djokovic had done.

“I was just below par with my game,” Djokovic said. “My legs were not there. I was trying. I did my best.”

Djokovic struggled against Medvedev for much of the match. © USA Today Sports

The fact that Djokovic’s first tears came before the end of the final game rather than after the match made little difference in the context of the contest.

Djokovic has fallen short this year, but you can bet your life that he will come again with full force in his efforts to capture that record Grand Slam title next season.

In the meantime, Sunday should shift some of the narrative surrounding Djokovic and open up the eyes of more people to his achievements as well as his character.

He’s not perfect, of course, but he’s far from the villain he’s so often painted to be. The US Open crowd have realized that – let’s hope some others can too.

England vs India: Fifth Test won’t be a one-off, we want the series to be completed, says Ganguly

Adapting to scorching heat will be the biggest challenge,…