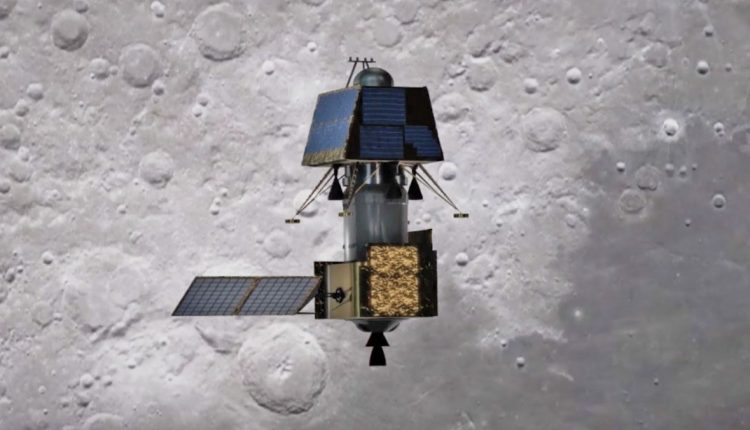 An artist’s impression of Chandrayaan 2 cruising above the Moon. The Vikram lander is still connected to the orbiter at this point. Image: ISRO

Chandrayaan 2 is the second spacecraft in India’s series of lunar exploration satellites.
Through August-September 2019, the mission entered lunar orbit, but while the surface mission failed with a crash, the orbital mission has continued.
According to ISRO, the orbital mission is expected to last for seven years, until 2026.

Bengaluru: The observations of the Chandrayaan 2 orbiter’s eight instruments have yielded important findings about the Moon, according to the Indian Space Research Organisation (ISRO).

Earlier this week, ISRO hosted discussions on lunar science with “the people of the country, to engage Indian academia, institutes, students and people from all disciplines and walks of life”, through a two-day ‘Lunar Science Workshop’, and also released data from the Chandrayaan 2 mission.

The workshop, conducted virtually, commemorated the completion of two years of the Chandrayaan 2 mission in orbit around the Moon.

ISRO chairman and Department of Space secretary K. Sivan inaugurated the workshop and released results from the mission plus data products for the scientific community’s use.

The Solar X-ray Monitor (XSM) instrument observed micro-flares from the Sun during the star’s ‘quiet’ period – useful to understand why the Sun’s atmosphere is so much hotter than its surface.

The Imaging Infra-Red Spectrometer (IIRS) instrument made the first unambiguous detection of hydroxyl ions and water-ice on the Moon’s surface.

ISRO also said Chandrayaan 2 – with its Orbiter High Resolution Camera (OHRC) instrument – has imaged the Moon’s surface from a 100-km high lunar orbit with the “best-ever” resolution of 25 cm.

The science data from the mission has been archived in the Indian Space Science Data Centre (ISSDC) at Byalalu, near Bengaluru, and is available to access for further analysis through ISRO’s public PRADAN portal.

Chandrayaan 2 is the second spacecraft in India’s series of lunar exploration satellites. It comprised an orbiter, a lander named ‘Vikram’ and a rover named ‘Pragyan’, and aimed to explore the Moon’s hitherto unexplored south polar region.

ISRO launched the mission onboard a GSLV Mk III rocket from Sriharikota on July 22, 2019. By firing its thrusters, the mission inserted itself into a lunar orbit on August 20, 2019.

On September 2, the orbiter and lander modules separated into two independent satellites.

On September 7, however, the Vikram lander failed in its descent over the Moon’s surface. After getting to within 2.1 km of the Moon’s surface, it dropped down and crashed. ISRO subsequently lost communication from the lander – which held the rover inside itself.

The orbiter however continued operating,  with ISRO saying its expected lifetime would be seven years. It will continue studying signs of the Moon’s evolution as well as map the distribution of various elements and compounds over, and under, the Moon.

Watch: When US Open finalists Emma Raducanu and Leylah Fernandez faced off at 2018 junior Wimbledon