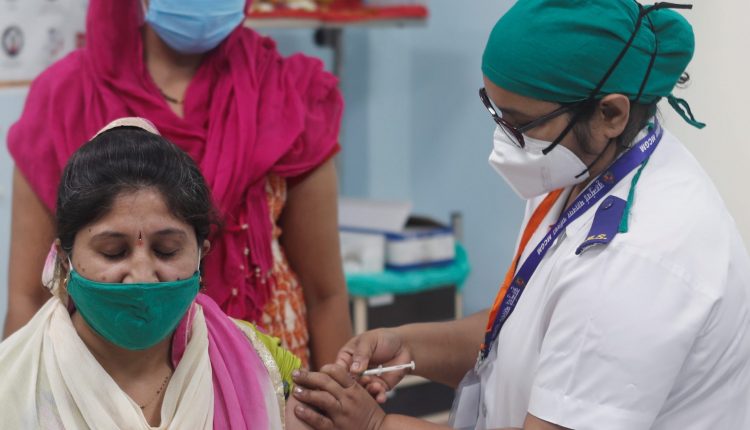 A healthcare worker reacts as she receives a dose of Covishield at a medical centre in Mumbai, January 19, 2021. Photo: Reuters/Francis Mascarenhas

The Union health ministry has courted controversy saying the difference between one and two doses of vaccines against death by COVID-19 is only 0.9 percentage points.
Experts have said this claim is not consistent with results from the medical research literature as well as observational data.
Unnamed government officials had been quoted saying in May 2021, when India had a vaccine shortage, that Covishield could work as a single-dose shot.

New Delhi: On September 9, the Union health ministry claimed that both single-dose and double-dose vaccination protect almost equally against death by COVID-19.

Specifically, Deccan Herald reported, the ministry has said the first dose is 96.6% efficacious against deaths by COVID-19 and the second dose, 97.5%.

However, both this and other news outlets have reported that these claims go against the bulk of medical research, which has said the current crop of double-dose vaccines are significantly more efficacious after both doses have been administered.

According to Telegraph, the health ministry’s numbers are from an exercise in which it combined data from three sources: of vaccinated individuals, of people who’d had COVID-19 and of people who had died due to COVID-19. The ministry linked them together with mobile and ID numbers.

The ministry had reportedly setup this database to understand vaccination coverage and effectiveness, and is expected to be available for public access via the health ministry website soon.

“The protective effect against death is there in all age groups – 60 years or older, between 45 and 59, and 18 to 44,” Telegraph quoted Indian Council of Medical Research (ICMR) chief Balram Bhargava as saying.

However, Jacob John, a professor of community health at Christian Medical College, Vellore, told the newspaper that the ministry’s claim is “inconsistent” with most researchers findings that he had seen.

He added that it has been known that both doses protect against death, but that the difference should be larger than what the ministry has touted.

As it happens, researchers at the Indian Council of Medical Research had conducted an analysis in July this year. The researchers assessed vaccination and mortality rates among 1.17 lakh Tamil Nadu police personnel.

They reported that those who had received one dose (of either Covaxin or Covishield) were 82% protected against death by COVID-19 while those who’d received both doses were 95% protected.

In conclusion, they wrote in their correspondence to the ICMR’s Indian Journal of Medical Research:

… our analysis indicated COVID-19 vaccination, even with single dose, was effective in preventing deaths. It is necessary to increase coverage of COVID-19 vaccines, regardless of the type of vaccines, to reduce mortality in current as well as future waves of COVID-19 epidemic.

Around 80% protection against death by COVID-19 is not inconsiderable, and the researchers allude to this figure in their conclusion.

However, they also found that both doses together are 95% protective. This finding is at odds with the health ministry’s claim that the difference in protection between single- and double-dose regimes is only 0.9 percentage points.

The Indian government had courted controversy earlier this year when, in the midst of a crippling vaccine shortage, unnamed officials suggested that Covishield – designed as a two-dose vaccine – could work even with one dose.

At the time, in May, a study in England had found that one dose of Covishield was only 33% efficacious against symptomatic COVID caused by the delta variant (B.1.617.2).

Experts hit back against the idea, even as the delta variant surged and, together with other social and political factors, precipitated a devastating second outbreak of COVID-19 in the country.

The post Health Min Says One Dose Almost as Good as Two To Shield Against Death by COVID appeared first on The Wire Science.

We’re Losing Something – But Are We Right To Call It Biodiversity?

Madi cabinet takes oath, portfolios not out till midnight

Virat Kohli will remain captain of all formats: BCCI