What a Warmer, Wetter World Means for Insects and for Food Security 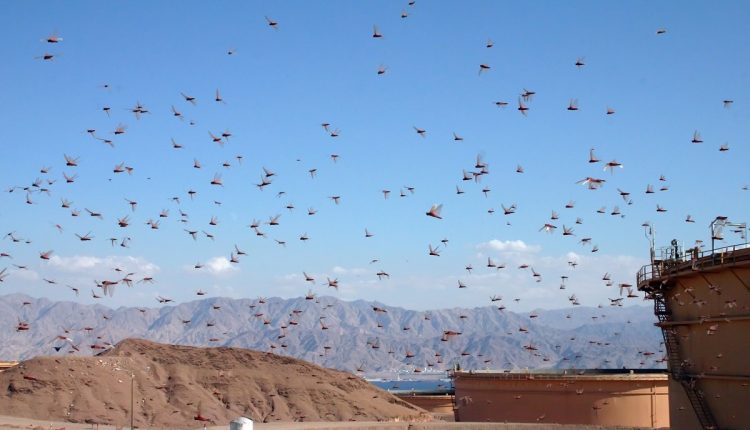 A representative image of a locust swarm. Photo: Niv Singer/Flickr CC BY SA 2.0

Climate change stressors such as flooding and drought affect what insects eat and can worsen outbreaks of pests like the fall armyworm.
While elevation in CO₂ does not directly impact insects, it can alter plants’ nutritional quality and chemistry. This will indirectly affect insect herbivores.
There is a need for more insect monitoring and forecasting and modelling so that we can develop adaptation strategies.

A new report has been released by the Intergovernmental Panel on Climate Change (IPCC) – the UN’s authority on climate change – which revealed the latest research on how the Earth is changing and what those changes will mean for the future.

The report shows there’s been a dramatic increase in carbon dioxide (CO2) levels and temperatures, stating that Earth is likely to reach the crucial 1.5℃ warming limit in the early 2030s. There are also dramatic changes in precipitation – water that’s released from clouds, such as rain, snow, or hail.

As an entomologist, I study insects and how climate change stressors – such as flooding and drought – affect what insects eat. I’m also a food security advocate.

The report’s projections caused me to reflect on the many direct and indirect impacts that a warmer and wetter world will have on insects, their natural enemies, plants and African food security.

Across the African continent, recent years brought out some of these extremes, showing what a serious issue this is.

For instance, in southern Africa, the 2016 outbreak of the fall armyworm has continued to spread because of increased rainfall and elevated temperatures – perfect conditions for them to breed and grow quickly. These conditions also supported the growth of over 70 host plants that are fed upon by the fall armyworm.

There’s also a major desert locust outbreak in eastern Africa which started in 2019. It spread due to unusually heavy rainfall that created the perfect environment for locusts to breed and increase in numbers and size. The rains also support the growth of vegetation to feed them.

Here I present a closer look at some of the report’s key findings and show how changes could affect insects and, indirectly, us.

Global levels of CO₂ are already high, and they’re expected to continue rising. While elevation in CO₂ does not directly impact insects, it can alter plants’ nutritional quality and chemistry. This will indirectly affect insect herbivores.

For instance, according to recent research, elevated CO₂ reduces the nutritional quality of plant tissues by reducing protein concentrations and certain amino acids in the leaves. To compensate, insect herbivores eat more.

Elevated CO₂ levels can also affect an insect’s development, driving down their numbers – as seen in this study of dung beetles.

The report says that global warming of 1.5°C and 2°C will be exceeded during the 21st century unless deep reductions in CO₂ and other greenhouse gas emissions occur in the coming decades.

This will lead to increases in the population growth rate of certain insects. Because they grow fast they’ll reproduce more. Their numbers will multiply and this will ultimately lead to more crop damage.

Previous research projected that with every increase in one degree of global warming, losses of crops to insects will increase from 10% to 25%.

The changing climate is expected to change precipitation patterns – such as rainfall. The report anticipates increased and frequent drought and flooding incidences across the world. These environmental stressors will have an impact on plant productivity, plant chemistry, defences, nutritional quality, palatability, and digestibility.

Consequently, insects eat more plants and this can result in more crop damage.

On the other hand, increased precipitation can support fresh vegetation (food for insects) and can facilitate population buildup of insects. As seen with the desert locust, for example, prolonged rain allowed them to have food, multiply in numbers and spread. This was also the case for the fall armyworm; plentiful rains supported the growth of their host plants. When food for the insects is no longer a limiting factor, their populations continue to build up.

All insects have natural enemies or predators. For example, the maize stem borer – a significant insect pest of maize across Africa – has several natural enemies, such as Cotesia flavipes. These predators reduce the populations of insects and further reduce the need to use pesticides to control insect pests.

Predators can be affected by climate changes in many ways. For instance, they can be sensitive to increases in temperature and precipitation, ultimately reducing their numbers. Fewer natural enemies could result in more insect pests. One study, which modelled temperature changes on stem borers in East Africa, showed an increase in their numbers and a decrease in impact by natural enemies.

In addition, because of climate change, both crop distribution ranges and insects will shift. As they seek out conditions that suit them, insects move to new areas that lack their natural enemies. This will cause their populations to grow, resulting in more crop damage.

A farmer shows a corn shoot infested with fall armyworm at his farm in Narayangaon village in Maharashtra, December 18, 2018. Photo: Reuters/Rajendra Jadhav

Because of climate change, weather extremes are likely to happen together.

According to research, plants exposed to double stresses may become even more palatable to insects. This is because when two stressors (say drought and insect herbivory, flooding and insect herbivory, or elevated carbon dioxide and elevated heat) happen together, their impact on crops can be additive or synergistic. This would lead to increased crop damage and reduced crop yields.

What can be done?

Climate change will affect agricultural plants and the insects associated with them. These effects are complex, but it is certain pest pressures will increase. There is a need for more insect monitoring and forecasting and modelling so that we can develop adaptation strategies.

In addition, countries should continue to monitor, share information, and use historical data and modelling to predict and prepare for an uncertain future that is expected to have hungrier insect pests, with impacts on crop productivity and food security.

This article is republished from The Conversation under a Creative Commons license. Read the original article.

The post What a Warmer, Wetter World Means for Insects and for Food Security appeared first on The Wire Science.