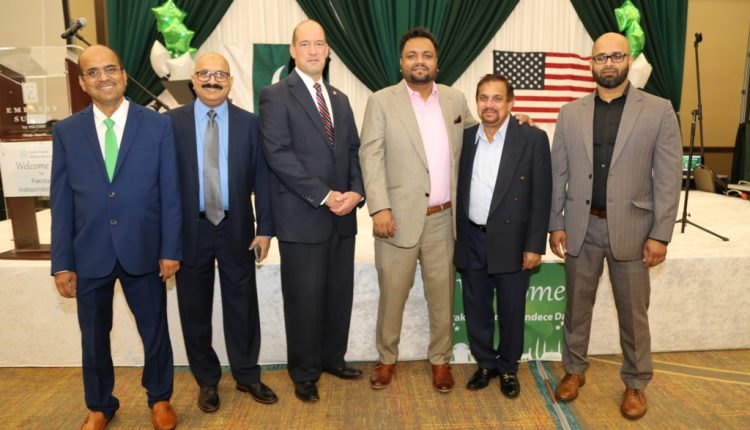 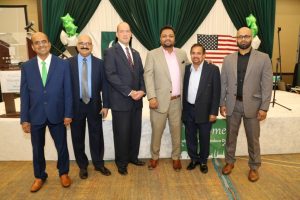 Report & Pictures Syed Ullah
NAPERVILLE, IL- On September 5th, 2021 history was made in Naperville, Illinois as the Pakistani American community came together, for the first time in Naperville, in the world-famous Embassy suite to celebrate the 75th Independence Day of the Islamic Republic of Pakistan. Pakistani Community Chicago’s Show of Love for Pakistan.

More than 1200 people gathered last Sunday to celebrate the Pakistan Independent Festival in Naperville, Illinois, Event was called Meri Pehchan Pakistan. The event turned into one of the successful annual events in Illinois. This event was a dream come true for the Shah Qureshi and Syed Khalil Ullah members of the organizing Team as they had been planning for more than a year to hold the Pakistan Independence Day at such an elegant venue.

The event was organized by the South Asian welfare Association, which was led by Shah Jahan Qureshi, Founder, and President of the Organization. South Asian welfare Association totally operates as a non-profit organization and aims to provide a platform for the Pakistani Americans at the grass-roots levels to strengthen Pakistan-US ties and serve as a bridge between Pakistani-Americans and the community at large.

President Shah Qureshi said, “This program is designed for our youth of the community, and they are representing our future. My heartfelt thanks also go out to the members of the Pakistani American community who have come together in supporting this event, which I hope will be appreciated and remembered by the community.”

The event was thoroughly enjoyed by the large number of Pakistanis who had gleefully turned up at the Embassy Suites by Hilton.

The day was beginning with a political segment emceed by Arshia Hussnain and Ahmed Rana. Program emcees did a wonderful job of keeping the program going efficiently. Recitation from the Holy Qur’an was followed by the national anthems of the US and Pakistan by Ali Saad.

The celebration was attended by several elected officials from the federal, state, and local level including Several well-known dignitaries graced the occasion,

In his address on the occasion, Consul General Tariq Karim, while highlighting the U.S. as an important development partner for Pakistan, stated that there was immense potential for the two sides to expand and deepen their relations in diverse fields.

The 45 award recognizes individuals “who have made outstanding contributions to the Chicago area in the fields of business, Culture, Education, Government, Medicine, Media, Research, or Community service.

Color of Pakistan Dance with Song Traditional Performance of Pakistani Provinces like Khyber Pakhtunkhwa, Sindh, Punjab and Balochistan were performed by the group led by Lubna Ejaz and Saji Malik. 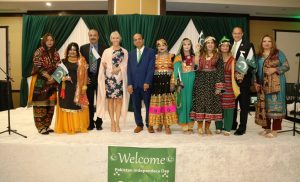 The emphasis of the day was a spectacular performance of Music and a scintillating performance by Malika Faisal were the highlights of the Meri Pehchan Pakistan, Huge Claps arose the moment when Malika Faisal stepped on stage as exhilaration took over her. The audience lauded his popular songs as the occasion continued to pay him a tribute including high Energetic Women and Men. Overall Singer Malika Faisal enthralled the crowd with patriotic and other hit songs.

The Consul General also cut the 75th Independence Day of Pakistan cake along with organizers and community members.

The Consul general of Pakistan in Chicago stayed till the end and enjoyed it. He applauded the organizers and the community and stressed that the community must stay united and continue to be a vital part of American society.

Pakistan Independence Day celebration at Naperville Illinois on September 5th, 2021. It was a rare spectacle. The attendees’ show of love for Pakistan was profuse, soul-lifting, and spontaneous.

At the end Organizers, Shah Qureshi and Syed Khalil Ullah thanked all sponsors for their support and hard work in making the event a success. All agreed that this year’s Pakistan Independence Day celebrations broke all previous records as far as the attendance, quality of entertainment, selection of venue, and size of the festival.

Haryana on alert as Yamuna in spate