Bihar: Already Beset by Uneven Weather, What Does Climate Change Have in Store? 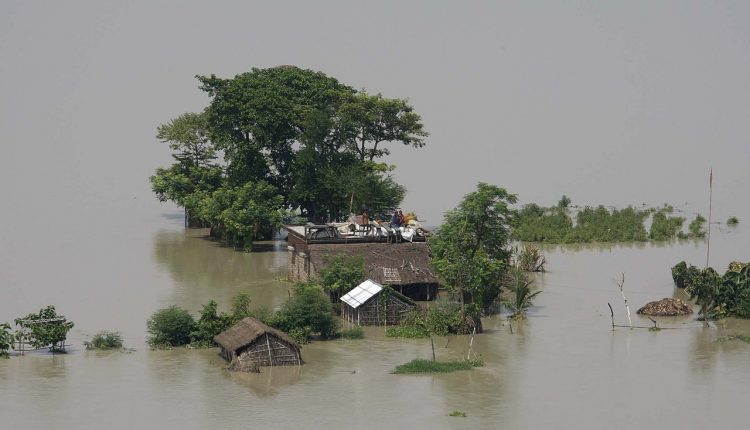 An aerial view of a flood-affected village in Bihar, September 2008. Photo: Ministry of Defence/PIB, GODL

Bihar has an odd rainfall pattern, and its hydrogeology is such that more than half of the state is flood-prone.
Warming land imperils its agricultural yield.
The state government is developing a climate adaptation and mitigation strategy, a part of it with the UN Environment Programme.

Ramcharan Mandal (60) had sowed maize in his two acres of land this year but excess rainfall, and the flood that followed, destroyed his crop.

“I had spent 30,000 rupees to cultivate maize,” he told The Wire. “I will not be able to recover my capital. This is a complete loss.”

The cost of cultivation doesn’t include the money he spent on labour, but Mandal only stands to receive Rs 2,000 from the state as compensation.

Mandal lives in Kursela block of Katihar district, in Bihar, and isn’t alone in suffering crop losses. Thousands of farmers across north Bihar have suffered similarly due to the heavy rain this year.

However, unlike Ramcharan Mandal, Devnandan Yadav, a farmer in Jamui, is on the verge of losing his paddy crop due to low rainfall.

“The rainfall was so low that I had to sow the paddy after bringing water from nearby ponds and canals using an electric motor,” Yadav said.

“In 2019 and 2020, there was enough rain, and I had reaped a good yield of paddy. But this year, the paddy plants’ leaves have turned reddish due to lack of water, the plants are not growing and insects are destroying the crop as well,” he added.

While India has had difficulty predicting the evolution of the monsoons over the country, just these two instances speak to how much more unpredictable, and destructive, the rains could get as climate change becomes worse.

On August 7, the Intergovernmental Panel on Climate Change (IPCC) released the first instalment of its eagerly anticipated Sixth Assessment Report. One of its direr findings: Earth’s average surface temperature is likely to be 1.5º C warmer than it was in the pre-industrial era in only three decades.

Some of the many consequences of this drastic change include more, and even hotter, hot days, more intense rain in some areas and droughts in others, and rising sea levels that could displace millions in India alone.

The state of Bihar doesn’t have a shoreline, but both its people and their livelihoods will be at great risk in the coming years.

“Rainfall distribution in Bihar is very odd, which is why we are seeing heavy flooding on one side and dry weather on the other side,” Lal Bahadur Roy, a professor in the civic works department at the National Institute of Technology, Patna, told The Wire.

For example, a paper published in 2014 noted that Bihar is particularly vulnerable to climatic changes. According to its authors, Northern Bihar is watered by glacial rivers, as a result of which 73.6% of this region is flood-prone. The rivers of Southern Bihar are rain-fed, and whose waters typically drain into lakes behind the higher southern bank of the Ganga river. And when the Ganga is in spate, the lakes overflow as well, often submerging the kharif crop. As a result, more than half the state is flood-prone.

The remainder, however, often suffers droughts.

This is an important reason why a national climate vulnerability assessment that the Centre released in April 2021 included Bihar on the list of states that are highly vulnerable to climate change (others include Jharkhand, Mizoram, Odisha and West Bengal).

According to data compiled by Bihar’s water resources department, 14 districts in the state had recorded less-than-normal rain until August 23, while most of Northern Bihar was flooded. Of the former 14, Purnia, Begusarai and Jamui had received 34%, 17% and 16% less rain, respectively.

“We will have a lower yield of crops due to uneven rainfall distribution, excessive heat waves and other extreme weather events,” Roy added.

In 2019, a delayed monsoon plus a heat wave left 140 people dead and more than 1,200 in need of medical attention, across Bihar. But later that same year, rain in just two days of September left Patna horribly water-logged for several days. Then, on one day in June 2020, lightning strikes killed 93 people.

“Our research has indicated that night-time temperature during the winter has been increasing,” Pradhan Parth Sarthi, a professor in the department of environmental sciences at Central University of  South Bihar, told The Wire. “The IPCC report says that the land temperature may rise by 1.5-2º C” over the pre-industrial era by 2050. “We estimate that in Bihar, the temperature may rise” by a little more, up to 1º C, and “this will have a huge impact on Bihar”.

Chief conservator of forests and nodal climate change officer A.K. Dwivedi said two effects of climate change are already visible. “One is the change in the time-frame of rainfall during the monsoons – earlier, the rain wouldn’t continue until September, but now it rains during September and October.”

The other effect, he added, is that temperatures in south Bihar have started to touch 49º C, versus 42-43º C until a few years ago. “Now everything is going to the extreme, which means there is an ecological imbalance.”

Dipak Kumar Singh, the principal secretary of environment, forests and climate change, said the Government of Bihar has taken multiple steps to minimise the impact of climate change. One of them is a memorandum of understanding the state signed with the UN Environment Program (UNEP) in February 2021.

“Under this, we will chalk out a long-term strategy to minimise carbon emissions,” he told The Wire.

The Bihar government had drafted a climate action plan and sent it to the Centre in 2015, which promptly returned it because the plan didn’t include strategies to reduce carbon emissions. The Bihar-UNEP tie-up aims to plug this gap.

Dwivedi, the climate change officer, also said the state is working on an initiative to map climate vulnerability at the panchayat level, along nine parameters, including access to health and education and exposure to pollution. “Accordingly, we will chalk out a plan to decide whether mitigation will be needed or if adaptation will be fine”.

This, he added, was in addition to the ‘Jal Jeevan Hariyali’ mission to increase green cover and to renovate ponds.

The post Bihar: Already Beset by Uneven Weather, What Does Climate Change Have in Store? appeared first on The Wire Science.