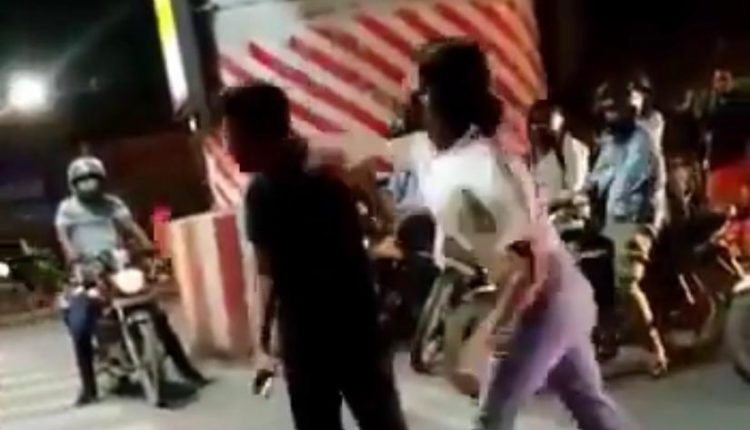 A Lucknow girl who slapped a cab driver over 20 times in a viral video has been booked for robbery attempt. The driver, Shahadat, alleged in his complaint that the woman slapped him in full public view for no fault of his, breaking his phone and catching him by collar. He also alleged that she looted Rs 600 that he had kept in the car’s dashboard.

The case against the girl was lodged after the police initially booked the cab driver and his two friends for breach of peace, an action that drew a lot of criticism on social media. The road rage incident took place on July 31.

Identified as Priyadarshini, the girl is a resident of Kesari Kheda in Krishna Nagar, Lucknow.

Strict action should be taken… she must be in cage…
Where are the feminist ?
Why they are not shouting ?

While slapping the cabbie on a busy Awadh Nagar street, the girl had alleged that the driver was driving at a high speed and she narrowly missed being run over. She has been booked on the charges of committing or attempting to commit robbery, causing hurt and loss.

In the viral video, the woman can purportedly be seen crossing the street and stopping in front of the car. She then opens the driver`s door and drags him out and starts slapping and hitting him while pulling him by the collar. The driver can be heard requesting bystanders to call policewomen to the spot.

However, she continues to assault the driver and even flings his phone on the ground. A bystander who attempts to intervene also gets a slap from the woman.

The video generated outrage on Twitter with one user posting: “First of all how can she cross the road when vehicles are moving? Isn’t that her fault and how can the police allow this? And pls support students too #ArrestLucknowGirl.”

Another microblogger said: “See was trying to suicide…she came in front of moving traffic.. if cab driver wouldn’t control he was gone for killing chanrges.. girl should be given tough lesson.”

A few people also asked that the girl be shown no leniency because of her gender. One person tweeted: “Hope there is no leniency shown because of gender. This was an unwarranted, unprovoked act. Kudos to the guy for showing restraint. That must have been very hard.”

Zoe Saldana ‘independent to a fault’

Want to do playback for Priyanka, Deepika: Kavita Paudwal