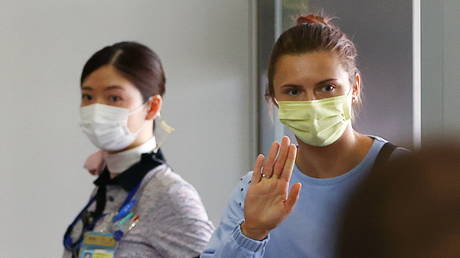 Belarusian Olympic sprinter Kristina Timanovskaya, who says officials from her country tried to force her to fly home from Tokyo, has left Japan on a flight to Austrian capital Vienna.

Timanovskaya, 24, had been expected to fly to Warsaw in Poland after being granted a humanitarian visa but instead took a Vienna-bound Austrian Airlines flight out of Narita Airport on Wednesday.

It was not immediately clear if Timanovskaya plans to remain in Austria or take a connecting flight on to Poland.

There were unconfirmed reports, cited by TASS, that Polish embassy staff who were accompanying the athlete may have been made the decision to change destinations because a number of foreign journalists had also planned to fly to Warsaw.

The scandal surrounding Timanovskaya erupted when she criticized Belarusian Olympic team officials on social media, expressing her dissatisfaction at unexpectedly being included in the 4x400m relay race when some of her teammates were ruled ineligible to compete.

She was due to race in the 200m in Tokyo on Monday, but says she was ordered onto a flight back to Belarus on Sunday.

Timanovskaya sought police protection at Haneda airport in Tokyo and said she feared being thrown into jail should she return to her homeland.

Belarusian team officials have said they withdrew Timanovskaya from the Tokyo Games because of her “emotional and psychological state.”

‘We got signals something was going on’: Belarus coach says Timanovskaya ‘behaving strangely’ at Olympics before flight scandal

Belarusian opposition activists and foreign officials – including from the US State Department – have viewed Timanovskaya’s case as part of a crackdown on dissent by Belarusian President Alexander Lukashenko, even though the sprinter says she was not making any kind of political statement.

Timanovskaya’s husband, Arseniy Zdanevich, has left Belarus and is currently in Ukraine.

CBI raid not against Kejriwal: Jaitley