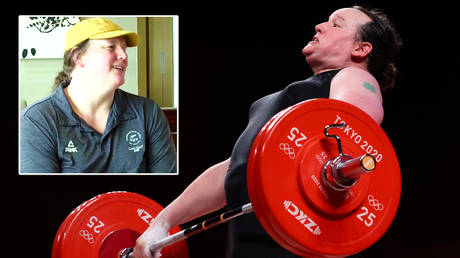 Speaking to reporters a day after failing with three snatches at the Tokyo Olympic Games, transgender weightlifter Laurel Hubbard has said she anticipates “the end of my journey” in sport and claimed some react to her with “fear”.

Softly-spoken Hubbard appeared to be a reluctant interviewee as the New Zealander held forth in front of the media, revealing that it is “probably time” for her to “start thinking about hanging up the boots” after a long career in weightlifting that took in her gender transition in 2012.

The 43-year-old spent much of the time gazing towards the floor under a baseball hat as she reflected on the controversy that has surrounded her participation in the women’s sport, thanking the International Olympic Committee (IOC) while acknowledging the likelihood that the rules around permitted testosterone levels are likely to change imminently, as the committee’s medical boss suggested last week.

“I don’t think it should be historic,” she said of her status as the Games’ first transgender athlete. “As we move into a new and more understanding world, people are starting to realize that people like me are just people.

“One thing I will say, though, is that, often, I think a lot of negative coverage and negative perception is not really based on evidence or principle. Rather, it’s based on emotion.

“People are often reacting out of, I suppose, fear or discomfort. I hope that, in time, they will open themselves up to a broader perspective.”

The debate around Hubbard’s involvement has been a fierce one in some quarters, with many critics arguing that athletes who have gone through puberty as men have an unfair advantage over rivals born as women, potentially denying them a place at prestigious tournaments that they should not be entitled to challenge for.

In a race for radical wokeness, Dove & BBC show how brands will destroy own reputation to support the destruction of women’s sport

“I’m certain that a conversation needs to be had because although we have rules at the moment, they will, no doubt, change and evolve as more is known about transgender athletes and what that means for participation in sport.

“But what I will say is that I’m extraordinarily grateful to the IOC for having the courage, the moral leadership to sort of consider sport as being an activity which should be open to all people.

“I’m not sure that a role model is something that I could ever aspire to be. Instead, I hope that just by being here, I can provide some sense of encouragement.

New Zealand’s Laurel Hubbard, the first openly transgender Olympian, said she would retire from weightlifting and felt her landmark appearance at #Tokyo2020 should be fast forgotten as sport takes greater strides to be more inclusive https://t.co/mEy7VgbpcC pic.twitter.com/NnEOC0vBYb

The self-deprecating veteran appears to now be on the verge of retirement. “My involvement in sport is a topic of considerable interest to some,” she accepted. “In some ways, I’m looking forward to this being the end of my journey as an athlete and the attention that comes from it.

“Age has caught up with me – in fact, if we’re being honest, it probably caught up with me some time ago. My involvement in sport has probably been due, if nothing else, to heroic amounts of anti-inflammatories. It’s probably time for me to start thinking about hanging up the boots.”