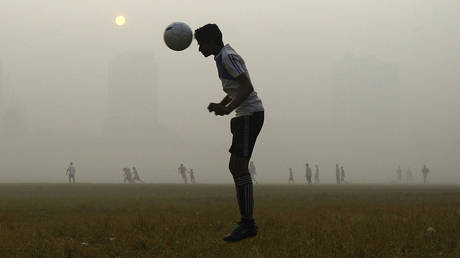 A brain expert has received a mixed reaction after warning football leaders that they need to consider “some other form of the game” that could include not heading the ball, speaking after a new study on dementia was published.

Dr Willie Stewart, a consultant hospital neuropathologist and honorary professor at the University of Glasgow, has led a study which he is calling “the missing link” between repeatedly heading the ball and neurodegenerative disease.

The concerned researcher says the sport must ask itself if heading the ball is “absolutely necessary” and that balls should now come with a health warning.

Previous studies have shown that ex-professionals were three-and-a-half times more likely to die with dementia than members of the general public, but authorities had argued that more research was required.

Risk of #dementia in former professional footballers varies by player position and career length, but not playing era.

Stewart insists that the connection has now become clear and demanded that action be taken.

“With the current data, we’re now at the point to suggest that football should be sold with a health warning saying repeated heading in football may lead to an increased risk of dementia,” he told The Guardian.

“That’s where we are now. That cannot be ignored. In the previous study, we didn’t have sufficient data to be able to look at the important factor: exposure to football.

“What we could say last time was that being a footballer meant your risk of dying with a degenerative brain disease was higher, but we couldn’t say what in football was doing it.

“Now, through using our surrogates for exposure to heading and brain injury, which are field position and length of playing the game, we can see that if you’re in a position where you’re exposed to a high level of head impacts or you play the game longer, your risk is higher.”

Although #football/ #soccer study, data add further to evidence that head impacts and head injury in all sport need addressed.

Message for sport is minimise, if not eliminate, unnecessary head impacts and improve head injury detection and management, including return to play

Thank you so much. You’ve done so much already when the people who should be discussing it have remained silent. My Dad has frontotemperal dementia and is currently in a home, it won’t change his prognosis but in his name I am determined to make people listen by telling his story

Published in the JAMA Neurology journal, the new research finds risks of neurodegenerative disease vary by player position and length of career but not by era.

“The data from this paper is the missing link in trying to understand this connection between sport and dementia” Stewart explained. “We put that together with what we know about the mortality risk… and there really isn’t anything else.

“There is no other proposed risk factor and this is one we could really address and eliminate this disease.

Amid the FA, Premier League and EFL announcing guidelines to reduce ‘high impact’ headers to 10 a week in training sessions, fans have critiqued Dr Stewart’s observations.

There’s a risk, and steps should be taken to reduce it (limits in training, kids football, changing the ball perhaps).
But to fundamentally change the most popular sport in the world to deal with this single issue? Way over the top.

If we all stay indoors, don’t do any sports, never challenge ourselves, then will you do-gooders be happy? We don’t need any more “experts” telling us what to do on matters of health & safety. Adults are more than capable of assessing risks themselves.

“It’s people like you that create anxiety and fear where there shouldn’t be any,” one respondent told Dr Stewart. “What a totally ridiculous thing to say. Yes when they played with a heavy ball it caused problems but the modern football is very light.”

Dr Stewart responding by saying: “Again, the regulation weight of a football has not changed in 150 years.”

Reiterating a previous question he had posed, he added: “Can we stop with the myth that old footballs were heavier? Yes, they might have got heavier when wet, but also got considerably slower, meaning less impact.”

A Tottenham fan and dementia awareness advocate told him: “My Dad wasn’t a pro but he was defender who would head the ball even with stitches in after serious head injuries. He played for decades. Thank you so much for doing this – it means the world to families like mine who will always be the unheard voices.”

Perhaps boxing should eliminate punching too 🤔

Others were less convinced by the academic’s conclusions. “There’s a risk, and steps should be taken to reduce it – limits in training, kids’ football, changing the ball, perhaps,” acknowledged one skeptic.

“But to fundamentally change the most popular sport in the world to deal with this single issue? Way over the top.”

One unimpressed reader suggested: “If we all stay indoors, don’t do any sports and never challenge ourselves, then will you do-gooders be happy?

“We don’t need any more ‘experts’ telling us what to do on matters of health and safety. Adults are more than capable of assessing risks themselves.”