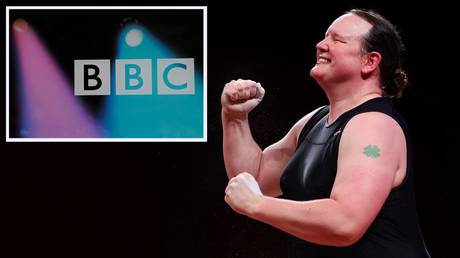 The BBC has been mocked for decimating debate over transgender athlete Laurel Hubbard’s Tokyo 2020 inclusion by threatening to block Twitter accounts responding unfavourably to an article, all under the guise of combatting hate.

READ MORE: In a race for radical wokeness, Dove & BBC show how brands will destroy own reputation to support the destruction of women’s sport

On Monday, 43-year-old weightlifter Hubbard became the first transgender athlete to compete at an Olympic Games when turning out for New Zealand in the +87kg snatch lift, having transitioned to female aged 35.

The decision to allow Hubbard to compete among women drew the ire of women who challenged the validity of the Kiwi’s inclusion, stating the physical advantages of a born male to a born woman.

Ultimately, Hubbard crashed out of the Olympics without registering a weight from three attempts in the event to finish bottom of the group and put paid to any chances of qualification despite the clean and jerk heat still remaining.

In response to an piece into Hubbard’s background titled ‘The reluctant history maker at the centre of sport’s transgender debate’ and published on the same day as the New Zealander’s exit, the Beeb received a wave of comments challenging Hubbard’s inclusion and the article’s tone of writing which was deemed disrespectful towards women.

A man who ‘transitions’ in middle age with the express intention of entering female competition is not reluctant. He has already broken World records, just like Zuby did in the gym one day for a joke.

In their own response to the backlash, Britain’s national broadcaster published a statement vowing to block any accounts posting ‘hate’, while using the hashtag #HateWontWin despite purporting to promote debate and criticism.

“At BBC Sport, we want our platforms to be a respectful place for discussion, constructive criticism, debate and opinion,” the statement read. “We know the vast majority of our followers want that too. So here’s our stance:

“We will block people bringing hate to our comments sections; We will report the most serious cases to the relevant authorities; We will work to make our accounts kind and respectful places.

“We will keep growing our coverage of all sports, and keep covering issues and discussions around equality in sport.”

However, many readers objected to the BBC’s definition of ‘hate’ and transphobia, which seemed to encompass anything that called into question the stance of siding with Hubbard’s inclusion and ignoring the argument

BBC are you saying the protections female biology needs for safety/fair play in sport is transphobic? And if women get angry that weight lifting categories are now only male and mixed sex, it’s an act of hate? This is the end of women’s sport, it’s a misogynistic, regressive move

👆Complaints have already been made about the article you’re threatening people over. It’s biased, sexist, refers to women as ‘cis’. Stop framing pushback to misogyny as ‘hate’ or women won’t pay the licence @OliverDowden @DCMS @KemiBadenoch @SophieJarvis94 @mragilligan @Ofcom

For example: “We’re waiting for the data to come in. People are making the assumption that being trans women athletes confers advantage. It isn’t obvious that it does. It didn’t with Renee Richards, it didn’t with Rachel McKinnon.”

In my understanding, if someone is offended by something said they get to report that to the police via your hate speech laws.

How many women here are offended by the term “cis”? Perhaps that needs reporting as hate speech, ladies?

Best to be the first one reporting.

“No study has reported muscle loss greater than 12% with testosterones suppression even after three years of hormone therapy. Males have approximately 40% greater muscle mass than females,

Whoa, did the BBC really just threaten to send the police around because of comments? Because women are arguing to keep their sports fair?

“BBC are you saying the protections female biology needs for safety/fair play in sport is transphobic? And if women get angry that weight lifting categories are now only male and mixed sex, it’s an act of hate? This is the end of women’s sport, it’s a misogynistic, regressive move,” MEP Belinda de Lucy, who has been critical of the entire story, argued.

Others voiced resentment at the seemingly Orwellian practice of women being forced to pay the obligatory television license fee to fund the BBC only to be silenced by the corporation’s Twitter account because of conflicting views.

Facebook cites right to silence, tells SC it cannot be…