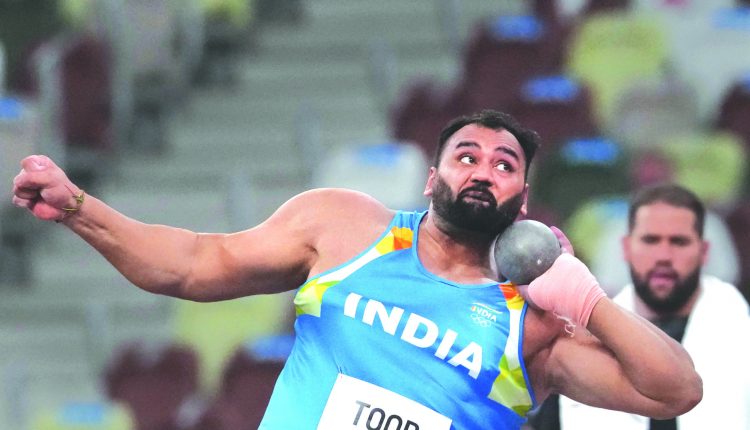 Tokyo, Aug 3: Asian record holder shot putter Tajinder Pal Singh Toor and javelin thrower Annu Rani failed to qualify for the final rounds of their respective events following below-par performances at the Olympics here on Tuesday.
The 26-year-old Toor, who was expected to at least make the finals, failed to live up to the expectations as he could only manage one legal throw of 19.99m, in his first attempt, to finish 13th out of 16 competitors in qualification A.
Competing with a heavily bandaged shoulder, his next two throws were fouls. Every participant gets only three attempts in the qualification round. The below-par show meant that Toor made an exit even before the start of second qualification.
Those who cleared 21.20m or at least 12 best performers from the two qualifying rounds made the final cut. Toor had qualified for the Olympics with a personal best of 21.49m in the Indian Grand Prix 4 in June. Had he managed to achieve that, he would have been an automatic qualifier to the finals.
Rio Olympics bronze winner Tomas Walsh of New Zealand took the top spot in qualification A with an automatic qualifying mark of 21.49m, which he produced in the third round. His effort was initially ruled as a foul but later restored as valid.
Brazil’s Darlan Romani (21.31m) and Egyptian Mostafa Amir Hassan (21.23m) were the other two automatic qualifiers for the final round.
In the women’s javelin throw, national record holder Rani was even worse as she finished 14th and last in qualification A with a best third round throw of 54.04m, which was well below her personal best of 63.24m which she had produced in March.
Rani, who qualified for the Olympics on the basis of her world rankings, was unable to breach the automatic entry standard of 64m and eventually ended at 29th and last after two qualifying rounds.
Her two other throws were 50.35m and 53.19m. Those who breach the automatic qualifying mark of 63m or at least 12 best performers make it to the finals. Maria Andrejczyk of Poland was the only thrower in qualification A who could earn automatic qualification by sending the spear to 65.25m in her first attempt.
Medal contender javelin thrower Neeraj Chopra will have his qualifying round on Wednesday. (PTI)

The post India falter in shotput and javelin throw appeared first on The Shillong Times.