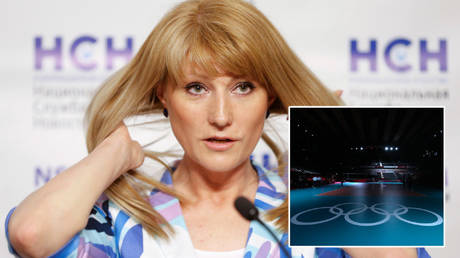 Ex-Olympic champ Svetlana Zhurova has claimed that Japan has been awarded medals at the Games as a form of gratitude for continuing as hosts despite the pandemic, adding that the judging would be scandalized if it was in Russia.

Now a State Duma deputy after turning to politics following her illustrious speed skating career, Zhurova believes that judges at the Games have opted to award wins to home athletes when they have been involved in tight contests with visiting competitors.

The four-time Olympian and gold medalist in the 500m at the Athens Games in 2004 also feels that Japan has been treated more generously as a competing nation because leaders agreed to go ahead with the Games, proceeding with the spectacle despite public protests amid a state of emergency being declared in Tokyo and other regions.

“If the Olympics were in Russia and there was such officiating, [especially] in favor of the hosts, we know what would have happened,” Zhurova told Championat, in a hint there would be uproar as anti-Russian sentiment seeped through.

“I think that many people argue that way: the Japanese are so sorry they found themselves in such a situation with a pandemic, [if] they [the International Olympic Committee] can [show their] gratitude in the form of several medals, let it be.

“In general, we understand that judges are people too, [but] if there is a choice [to] give the medal to the Japanese or someone else, they will give it to the host.”

The criticism comes amid Chinese social media users attacking Japanese athletes online after accusations that judges have been biased towards them in events such as the table tennis mixed doubles final and the men’s artistic gymnastics all-around event.

“If Japan hadn’t held the Olympics, the world might still sympathize with it. Now, not only is the Olympic spirit absent, the anti-Japanese sentiment has been awakened,” balked Shanghai-based vlogger Yin Jiliang, who boats more than a million followers on popular local social media platform Weibo.

‘No need for IOC if Tokyo Games are cancelled’: Olympic champion skater Svetlana Zhurova speaks out on Covid-19 crisis