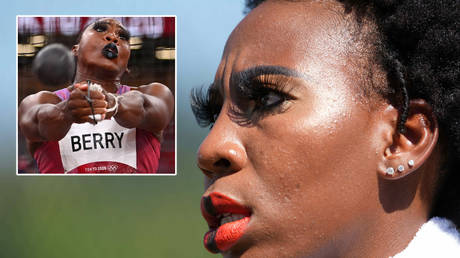 Gwen Berry, the hammer throw hopeful who faced the stands rather than the American flag while holding up a protest shirt and claimed the US national anthem “speaks to slaves” of “our blood being slain”, has failed to win a medal.

Two-time Olympian Berry had promised to “represent the oppressed people” if she won a podium place at the Olympic Games, but finished 11th out of 12 competitors in the finals, registering a distance of 71.35 meters.

At her country’s Olympic trials in June, the forthright 32-year-old held up a shirt reading ‘Activist Athlete’ while turning away from the flag after winning bronze, as well as venting her anger that ‘The Star-Spangled Banner’ had rung out.

“If you know your history, you know the full song of the national anthem,” Berry subsequently told Black News Channel. “The third paragraph speaks to slaves in America – our blood being slain… all over the floor.”

Former US president Donald Trump’s daughter-in-law, Lara, had warned on Fox News on Sunday that “a lot of people” were hoping Berry “doesn’t make it to that podium because, you know, she’s not doing the right thing with that”.

She told the same outlet after Berry’s protest at the trials: “I think we all know that this was a stunt. This was an attempt – a very selfish attempt, at that – by her to make a name for herself to cause some waves.

Shout out to self-proclaimed “activist athlete” @MzBerryThrows for coming in 11th place and failing to win a medal at the Olympics after turning her back on the American flag during qualifying in June! Well deserved! pic.twitter.com/U1ZbWqvNPS

Lara Trump is more upset at Black Olympian Gwen Berry for wanting to protest the National Anthem, than when MAGA terrorists literally BLUDGEONED Capitol Police Officers with the American Flag itself.

“You know what? If she wants to compete under the United States of America, I think she owes an apology to every American.”

Gwen Berry, who turned her back on the American flag, failed to win a medal at the Olympics.

Now we can get back to rooting for people who actually want to be part of Team USA.

Gwen Berry saying she’ll turn her back on the flag if she medals is about as newsworthy as me saying I’ll streak in Lambeau Field if I win the Super Bowl.

Berry had said that the “people who hate me aren’t here, so they can’t affect me”.

After raising her fist during the ceremony honoring her gold medal at the Pan American Games in Lima in 2019, she was reprimanded by the United States Olympic and Paralympic Committee and warned of further punishments over any future gestures.

The committee apologized for the sanction in the aftermath of George Floyd’s killing in the US last year and later amended its rules so that athletes can protest on podiums.

“I am my ancestors’ wildest dreams,” she told her following of more than 44,000 on Instagram last week, posing by the Olympic logo in her Team USA kit. “Forget what you heard. Freedom, power, purpose, change.”

She boarded her flight to Tokyo wearing an ‘Activist Athlete’ t-shirt, and wrote a day before her attempt to win a medal: “It’s a movement – not a moment.”

‘Don’t send her to the Olympics’: Fury after US hammer thrower turns back on flag as anthem plays during medal ceremony

Country needs a President who can protect Constitution:…

‘Freaky Ali’ will have you in splits, says…