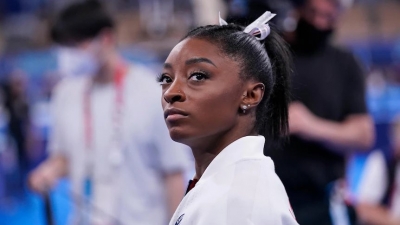 TOKYO, July 31:  Star American gymnast Simone Biles has opted out of the vault and uneven bars finals in artistic gymnastics to be held on Sunday at the Tokyo Olympics. The 24-year-old is still not ready to compete as she is dealing with ‘the twisties’, as per her Instagram stories on Friday.

Twisties are defined as a sudden inability to feel comfortable while twisting in mid-air. It means that the rhythm is off and the gymnast’s mind won’t allow the body to complete a particular trick.

The announcement was made by USA Gymnastics through their Twitter handle on Saturday. Simone has qualified for the floor exercise final on Monday followed by the balance beam final on Tuesday. A decision on her availability for the two events is yet to be decided.

“Today, after further consultation with medical staff, Simone Biles has decided to withdraw from the event finals for vault and the uneven bars. She will continue to be evaluated daily to determine whether to compete in the finals for floor exercise and balance beam. We remain in awe of Simone, who continues to handle this situation with courage and grace, and all of the athletes who have stepped up during these unexpected circumstances,” read the statement from USA Gymnastics.

Simone will be replaced in the vault final by her team-mate MyKayla Skinner. MyKayla was fourth in qualifying for the vault. But with Simone and Jade Carey ahead of her in scores and a two-gymnasts-per-final rule meant that she missed out on the final.

With Simone’s withdrawal, MyKayla gets a chance to end her gymnastics career on a high. “Looks like I get to put a competition Leo on just one more time. Can’t wait to compete in vault finals. Doing this for us @Simone_Biles (red heart emoji) It’s go time baby!” wrote an excited 24-year-old on Twitter.

Simone’s spot in the uneven bars final will be filled by the first reserve Melanie de Jesus dos Santos of France.

Projected as the biggest star of the Tokyo Olympics, Simone was tipped to be at her best after winning four gold medals in the 2016 Rio Olympics. But the six-time Olympic medallist sat out from the final of the team event on Tuesday and the individual all-around final on Thursday due to mental health concerns.
IANS

The post Simone Biles pulls out of vault and uneven bars finals at Olympics appeared first on The Shillong Times.

Husband arrested for getting wife killed by snake in Kerala