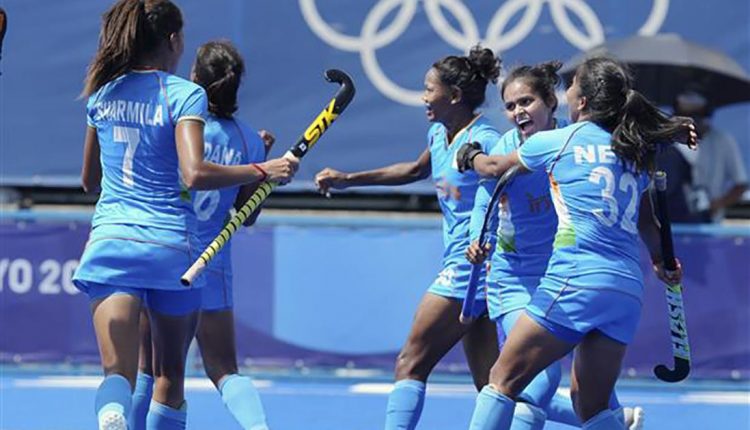 Indian women’s hockey team qualified for the Olympic quarterfinals after 41 years after it beat South Africa 4-3 and later defending champions Great Britain blanked Ireland 2-0 to ensure its passage into the knockout stage, here on Saturday.

India finished their group A league proceedings in fourth place with six points, riding on back-to-back wins over Ireland and South Africa and will now face pool B toppers Australia in the quarter-final on Monday.

The top four teams from each pool made it to the knockout stage.

Indian women team’s best finish at the Olympics was in Moscow back in 1980 when they reached the semi-finals but ended fourth.

While Great Britain’s win was required, no one can take away credit from Vandana Kataria, who scored a hat-trick in India’s win in a pulsating morning clash against the South Africans.

Young Neha Goyal (32nd) was the other goal getter.

“Today’s game was really tough, South Africa gave us a really good fight. They converted their chances in the circle. Defensively, we can be a lot better,” skipper Rani said.

India’s chief coach Sjoerd Marijne heaved a sigh of relief but was not happy with the number of goals his side conceded.

“We gave too many goals away, and I think we can score more goals, that is the main thing for today. We did what we had to do, we had to win this match, and we did,” he said.

“Playing in these circumstances, you feel it, the humidity and I think it’s more than 35 degrees on the pitch, it does not make it easy,” he added. Needing a win to stay alive in the competition, the Indians meant business and pressed hard on the South African defence from the start.

In doing so, India secured two penalty corners in the first two minutes of the match but drag-flicker Gurjit Kaur’s poor execution continued in the tournament.

Still, it didn’t take India long to open their account and in the fourth minute, Kataria gave her side the lead, tapping in from close range after being set up by Navneet Kaur’s great run from the right flank.

India kept up the pressure and penetrated the South African circle many times without much success.

But seconds from the end of first quarter, a lapse in concentration from the defence cost India dearly as South Africa drew level through Tarryn Glasby, who deflected in a long shot from Taryn Mallett.

India had enough time to regain their lead through a penalty corner but wasted the opportunity.

Two minutes into the second quarter, Kataria restored India’s lead when he deflected in Deep Grace Ekka’s flick from their fourth penalty corner.

The Indians had three more chances to extend their lead in the second quarter but they couldn’t do so.

The Rani Rampal-led side got two more penalty corners which they wasted, and then, Goyal’s effort from open play was saved by the South Africa goalkeeper.

Just like in the first quarter, India gave away their lead seconds away from half time when Hunter found the net from her team’s first penalty corner.

Two minutes after the change of ends, Goyal restored the lead again, deflecting in a Rani hit from a penalty corner as the Indians executed a fine variation.

The fragile Indian defence wilted under pressure once again, when South Africa drew level for the third time in the match, through a Marais strike.

South Africa enjoyed a good run of play in the initial minutes of final quarter and, in the process, secured three penalty corners quickly, but this time the Indian defence did enough to thwart the danger.

In the 49th minute, a brilliant Kataria saved the day for India when she deflected in Gurjit Kaur’s flick from another penalty corner.

Thereafter, the Indians fell back and looked content to keep the possession as South Africa pressed hard.

Two minutes from the final hooter, the Indians successfully referred a penalty corner decision given against them.

“It is about consistency. Yesterday (Friday), we played a really good match. And now we have a back to back and your legs are heavier, things are not going as smoothly. So these things you just know. You saw our basics were not as good as yesterday, it is all about that,” Marijne said.

“It is important to play matches. I am not someone, I hope you see that, who ever finds excuses, but we just have not done it. I don’t blame anyone, it is just the way it is.” Marijne feels the knockout stage would be different ball game from the group stage.

“The tournament starts again. If you play well, or not well in the pool matches it does not matter, it starts all over.

“It will be another type of game because it is high pressure, everything or nothing. The good thing is we had that in the last two matches, so we have already experienced that.” PTI

Quiz! Name every Test all-rounder with a higher batting average than bowling average

Messi returns to training for Barcelona