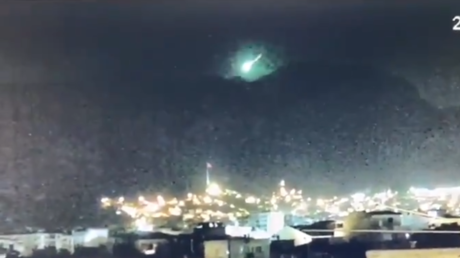 A green-tinted meteor has been spotted near the Turkish city of Izmir, falling in the mountains with a loud bang. The occurrence sent shockwaves through social media, eliciting wild rumors.

The meteor fell to Earth early on Saturday, its path captured on film by a number of people. Its descent was reportedly followed by a loud, explosion-like bang.

Footage circulating online shows the meteor had a greenish tint that lit up the night sky. It wasn’t immediately clear whether it had actually reached the ground or fully disintegrated mid-descent.

Its unusual color prompted the wildest rumors online, with some users believing it was a piece of rocket debris. Others suggested it was a depreciated satellite that had fallen out of its orbit.

The associate director of the Aegean University Observatory, Dr. Hasan Ali Dal, came up with a much more mundane and likely explanation for the occurrence, however. The scientist told local media the object was part of a meteor shower that began ‘raining’ over Earth last week and will continue to do so until the end of next month.

“The Perseid meteor shower, which started on July 24, will continue until August 24. The number [of meteors] will increase in the coming days,” he stated.

The shower, which occurs every year, is associated with the cloud of dust and larger particles emitted by its parent comet, Swift-Tuttle. It usually peaks around August 11, with some 50 meteors per hour observed at that point. The objects are rarely large enough to reach the ground, however.

More than 5,000 tons of extraterrestrial dust rain down on Earth each year, new research says

The green tint of the Izmir meteor has a simpler explanation, too. The color of its trail likely stems from its chemical composition, signaling that it contains large amounts of nickel.

Quiz! Name all the teams to compete in the Champions League T20

What if talks on farm laws fail? Farmer Unions warn of…

Tour de France to start from Dusseldorf in 2017