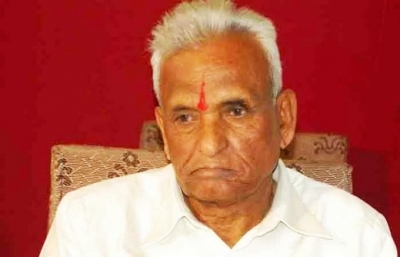 Deshmukh, 95, breathed his last at a private hospital following a brief illness, his family said.

As his mortal remains were taken from Solapur to Sangola this morning, thousands of people including farmers and labourers with moist eyes lined up on the roads, bidding their final adieu, many raising chants of ‘Ganpatrao Deshmukh, Amar Rahe’.

At Sangola, where his body draped in the National Tricolour was kept, thousands turned up to pay their last respects, many bowing with folded hands and catching his final glimpse.

Deshmukh, an epitome of humility and simplicity, had been elected to the Maharashtra Legislative Assembly from the Sangola seat a staggering 11 times since 1962, as a PWP candidate, without ever defecting to any other party.

He also lost elections twice in his seven-decade long political career — first in 1972 and then in 1995 — the second time vanquished by his own grandson but with a wafer-thin margin of around 190 votes.

However, he comfortably sailed through the so-called ‘BJP-wave’ in 2014 which washed away the 15-year-old Congress-NCP government in the state.

Deshmukh served as a minister briefly in 1978 when Sharad Pawar was the Chief Minister and later a full term in 1999 in the government of the late CM Vilasrao Deshmukh.

In 2012, the Maharashtra Legislature congratulated him warmly for completing a golden jubilee (50 years) as a MLA.

In 2019, Ganpatrao Deshmukh stunned political circles by deciding to retire from active and electoral politics mainly on grounds of his advanced age.

That year (2019), the prestigious Sangola seat was bagged by Shiv Sena’s Shahajibapu R. Patil — who had unsuccessfully contested against Deshmukh six times in the past — trouncing Deshmukh’s grandson and PWP candidate Aniket Deshmukh by around 750 votes.

Till date, he remains the second longest-serving legislator in India after the record of the late Tamil Nadu CM and DMK supremo, M. Karunanidhi.

Even the social media paid glowing tributes to Deshmukh and many recounted anecdotes of his simplicity in public life, his commitment to a single party and ideology all his life compared with the ‘defectors’ who are in fashion in recent years.(IANS)

Over 2,000 IS militants killed in Iraq’s Tal Afar