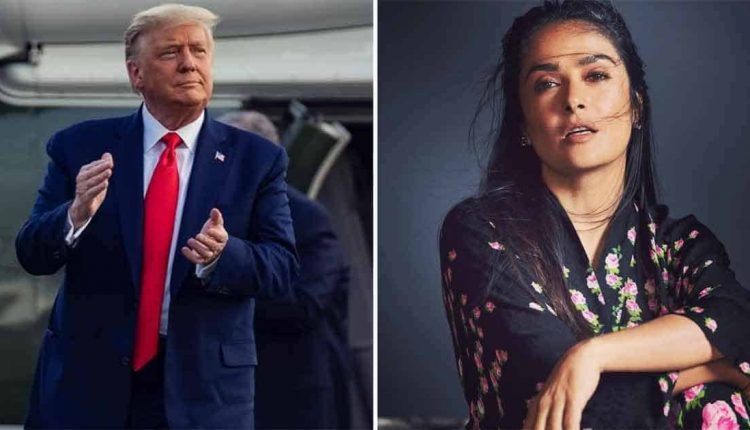 Read On To Know What Salma Hayek Has To Say About When Donald Trump Asked Her On A Date (Photo Credit: Instagram)

Salma Hayek is a sexy Mexican-American actress who never shies away from saying things as they are. The actress is now happily married to French billionaire and Kering CEO François-Henri Pinault, but did you know once upon a time former US President Donald Trump had tried getting her on a date with him? Scroll down and read the story.

Salma first spoke about Trump asking her on a date in October 2016. During a 2017 interaction, she spilled the beans on how they got acquainted, and he landed with her number. Check out the video at the end – we are sure you will laugh when you hear the account.

During her 2017 appearance on The Daily Show With Trevor Noah, Salma Hayek got candid about the time Donald Trump asked her out on a date. Recalling the incident, the then 50-year-old Mexican-American actress said that the former US President tried to hit on her at an event where he first befriended her then-boyfriend.

Shedding light on the incident, Salma Hayek told Trevor Noah, “I was at an event with my boyfriend… He (Trump) put his jacket on my shoulders as I was rubbing my shoulders because it was cold. (he was) so charming, so nice, super nice. He said I’m sorry your girlfriend – I saw she was cold… He kept talking to my boyfriend, and then he befriended my boyfriend, invited him to dinner and then he was like, ‘If you guys are in New York, you can come to Atlantic City, you can stay in my hotel. Give me your numbers.’”

Salman Hayek then revealed that Donald Trump never talked to her then-boyfriend again, but he did call her. She said, “He’s inviting me out, and I’m like, ‘What about my boyfriend? Am I crazy? Are you asking me out? You know I have a boyfriend,’” before claiming that the former president responded with, “He’s not good enough for you. He’s not important, he’s not big enough for you. You have to go out with me.”

When Noah asked if she married the same boyfriend, the actress said no leading the host to say that Donald Trump was right. Check out the video snippet here:

Salma Hayek first talked about Donald Trump asking her on a date in October 2016. In an interview on a Spanish language radio station then, The Hitman’s Wife’s Bodyguard said that when she rejected his offer, the former president put out an article against her in the National Enquirer. She even added that the report stated that he wouldn’t go out with her because she was too short.”

The post When Salma Hayek Revealed Donald Trump Hitting Her, Asking Out & Telling Her Boyfriend Isn’t Big Enough For Her appeared first on Koimoi.

Nature is healing? Not really. The pandemic has provided only temporary climate relief