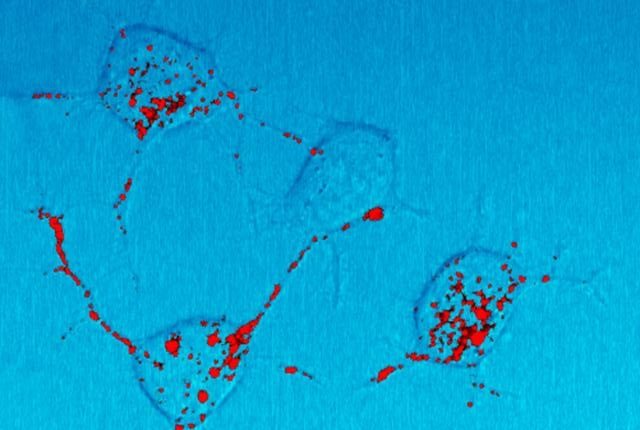 Prion protein, shown in red, can become infectious and cause neurodegenerative disease. Photo: NIAID/Flickr CC BY 2.0

According to Science Magazine, an investigation is underway to determine if the individual, who worked at a lab run by the National Research Institute for Agriculture, Food and Environment (INRAE), contracted the disease on the job. The worker has handled prions in the past.

Prions are misfolded, misshapen forms of normal proteins that can induce other proteins to misfold as well. According to Ars Technica, prion proteins are commonly found in human cells, including those in the brain, and cells of other animals. It is not yet clear what they normally do, however.

“When a misfolded prion enters the mix, it can corrupt the normal prion proteins around them, prompting them to misfold as well, clump together, and corrupt others,” the report said.

This can lead to brain tissue damage and eventually the formation of little holes to form, giving the brain a sponge-like appearance. Prion diseases are also called transmissible spongiform encephalopathies. The effects include “rapidly developing dementia, painful nerve damage, confusion, psychiatric symptoms, difficulty moving and/or speaking and hallucinations,” according to Ars Technica. The diseases don’t have any vaccines or treatments and are “always fatal”.

According to Science, the retired lab worker was diagnosed with Creutzfeldt-Jakob disease (CJD), which is the most common prion disease in humans.

Another INARE lab worker, Émilie Jaumain, died in June 2019 of the same disease. She had accidentally pricked herself in the thumb with forceps that were used to handle frozen slices of humanised mouse brains infected with prions in 2010. Jaumain’s family is suing INRAE for “manslaughter and endangering life”.

In a press release, the institutions said they imposed the moratorium to “study the possibility of a link with the [new patient’s] former professional activity and if necessary to adapt the preventative measures in force in research laboratories.”

Ronald Melki, a structural biologist at a prion lab, told Science that the moratorium is the right way to go. “It is always wise to ask questions about the whole working process when something goes wrong.”

A scientist with inside knowledge also told Science that the new patient, a woman who worked at INRAE’s Host-Pathogen Interactions and Immunity group in Toulouse, is still alive. French authorities were alerted to her diagnosis late last week, while the press release suggests it is not yet clear whether the woman has classic CJD.

According to Ars Technica, classic CJD affects one person in a million in the US. And “in roughly 85% of classic CJD patients, the disease is found to be sporadic. That is, there’s no clear explanation of what sparked the protein misfolding,” the report says. In the remaining instances, the disease is hereditary.

Variant CJD, or vCJD, is an infectious type that is associated with “mad cow” disease. This was the case in the UK in the 1980s and 1990s, when people who ate meat contaminated by prions were infected by variant CJD.

A 2020 paper published in the New England Journal of Medicine (NEJM) left little doubt that Jaumain had been infected on the job. She had variant CJD, but since Europe’s ‘mad cow’ outbreak ended after 2000 and the disease virtually disappeared, the paper said it was virtually impossible for someone her age in France to contract food-borne vCJD.

Science also said two independent reports – one by government inspectors – had found no safety violations at the lab where Jaumain worked. The press release also noted that the inspectors concluded there was “the presence of a risk control culture within the research teams”. The Jaumain family’s lawyer called the neutrality of the reports into question, however.

At the same time, the government inspectors’ report also revealed that there had been at least 17 accidents among the 100 or so scientists and technicians in France working with prions in the previous decade, raising concerns about how effective this risk control culture is. Five of these occurred when workers “stabbed or cut themselves with contaminated syringes or blades”.

As Australia fully vaccinates 14% of population, PM Morrison says 70% is new target for next phase in dropping Covid restrictions

Woman accuses BJP MLA, 6 others of raping her in Bhadohi